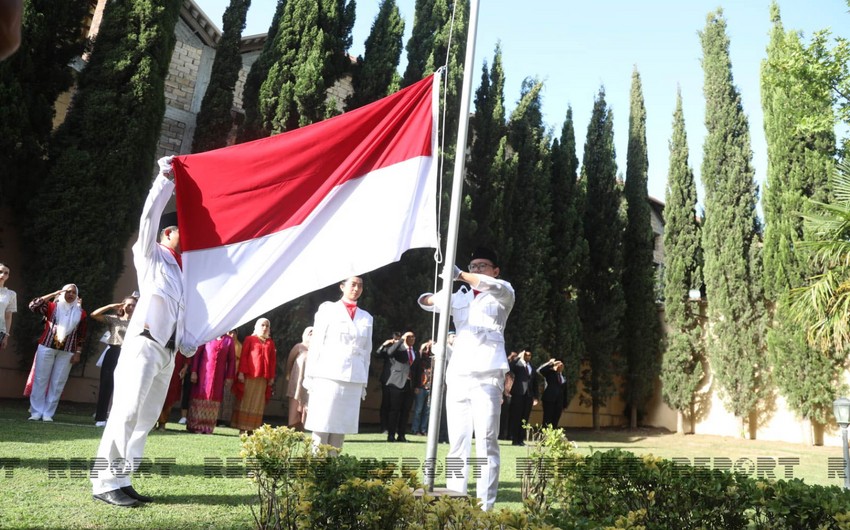 The Embassy of Indonesia in Baku has celebrated the 77th anniversary of Indonesia’s independence, Report informs.

On this occasion, on August 17, the embassy held a ceremony of raising the state flag to the sound of the national anthem “Indonesia Raya”.

The guests honored the memory of the Indonesians who sacrificed themselves for the independence of the country with a minute of silence, and prayers were read for the prosperity of the people and the state of Indonesia.

Ambassador Hildi Hamid said that Independence Day should be seen as a reminder to all Indonesians to preserve the diversity, unity and tolerance of the nation. It is very important for the Indonesian people to maintain “unity” during difficult times of crisis, such as the global COVID-19 pandemic.

This year also marks the 30th anniversary of the establishment of diplomatic relations between Indonesia and Azerbaijan.

“Since the establishment of diplomatic relations between the two countries, our relations have developed in accordance with the interests of the two peoples, on the basis of mutual respect, trust and friendship. Effective cooperation has been established between the two countries not only in the context of bilateral relations, but also on multilateral platforms,” the ambassador said.

Hamid presented prizes to the winners of traditional games held since July this year. These were kerupuk eating competitions (chips made from various types of starch or flour, as well as crushed dried protein products), playing dominoes, table tennis, tug of war, sack racing, etc.