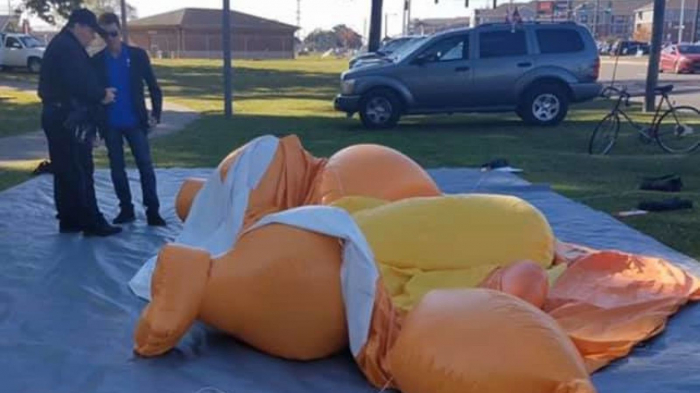 The giant orange, nappy-clad, mobile-phone clutching caricature of the president was damaged as the US leader visited the state.

A “Baby Trump” balloon has been knifed and deflated in Alabama.

The 6.1m (20ft) tall balloon had been set up in a park as the US president watched a football game nearby.

But a man who appeared to be unhappy with the orange, nappy-clad, mobile-phone-clutching caricature of Mr Trump ran at the balloon with a knife – cutting an 8ft gash in the back.

The unidentified man was subsequently arrested by police in Tuscaloosa.

A spokesperson for the Baby Trump Tour, a campaign group that “adopts” out the balloons for protests around the US, told Sky News: “One crazed Trump supporter will not stop us from our mission to save our democracy. We persist to resist!”

Read more:   I will not appoint business partners to important posts, says Poroshenko

The Baby Trump Tour was inspired by “Trump babysitters” in the UK who first flew one of the blimps over London.

British activists wanted to show their opposition to the US leader’s visit to the capital.