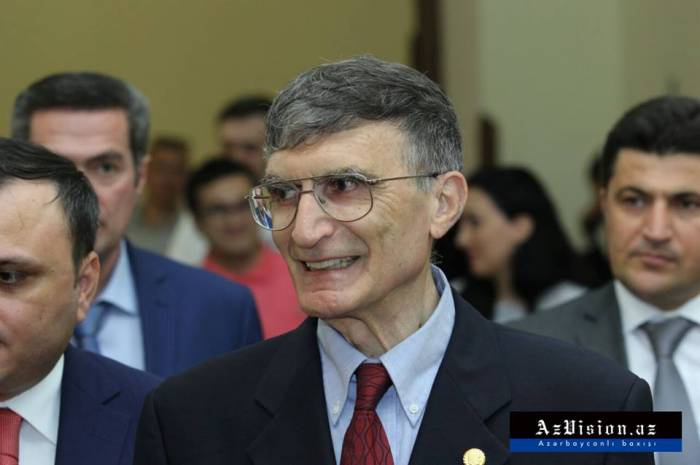 The Nobel laureate in chemistry world-renowned scientist of Turkish origin Aziz Sanjar, living in North Carolina, US, transferred a large sum to a bank account opened to pay for the future education costs of a 3-year-old Azerbaijani child Khadija Shahnazarova, who lost her parents in a missile strike by the Armenian Armed Forces on Ganja city on October 17, 2020, the Azerbaijani Embassy in the US told reporters.

According to the BBC report , Sanjar stressed that he was saddened by this tragic event that happened in the life of the little Khadija, noting the importance of creating appropriate funds to provide the children affected by the war with high-level education.

Following over a month of military action to liberate its territories from Armenian occupation, Azerbaijan has pushed Armenia to sign the surrender document. A joint statement on the matter was made by the Azerbaijani president, Armenia’s PM, and the president of Russia.

A complete ceasefire and a cessation of all hostilities in the zone of the Nagorno-Karabakh conflict were introduced at 00:00 hours (Moscow time) on 10 November 2020.

Armenian Armed Forces launched a large-scale military attack on positions of the Azerbaijani army on the front line, using large-caliber weapons, mortars, and artillery on Sept. 27. Azerbaijan responded with a counter-offensive along the entire front.

The conflict between the two South Caucasus countries began in 1988 when Armenia made territorial claims against Azerbaijan. As a result of the ensuing war, the Armenian Armed Forces occupied 20 percent of Azerbaijan, including the Nagorno-Karabakh region and seven surrounding districts. The 1994 ceasefire agreement was followed by peace negotiations.

Medical specialists have identified 19,138 new COVID-19 cases in 85 Russian regions over the past…

India has ‘successfully contained’ the Covid-19 pandemic says health minister, with no new cases in fifth of country

India’s health minister has claimed that the country has “successfully contained the pandemic,” citing a…