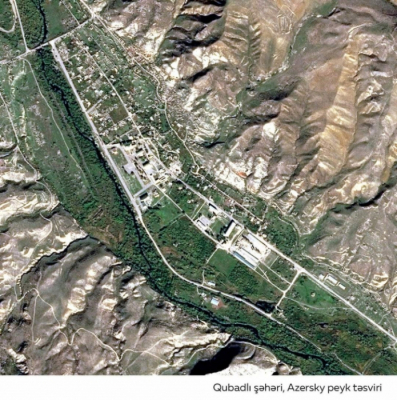 As a result of the successful operations of Glorious Azerbaijani Army, Gubadly city has been liberated from the Armenian occupation.

“Azercosmos” has released image of the newly-liberated Gubadly city, which has important strategic position.

During the years of occupation, the forests of Gubadly, consisting of valuable species of trees, large underground reserves, water sources rich with minerals were exploited by the Armenian occupiers.

Rare exhibits kept in the history museum of Gubadly region were stolen by Armenians. Occupiers also damaged the temple in “Gavur” valley, “Galali” and “Goygala” monuments, “Damirchilar” tomb, Haji Badal bridge and other historical monuments of the region.

As a result of Supreme Commander-in-Chief Ilham Aliyev’s efforts, life returns to our liberated lands and Azerbaijani flag is hoisted in our lands.

We will win this just struggle for the full territorial integrity of our country.

Victory is ours! Karabakh is Azerbaijan!