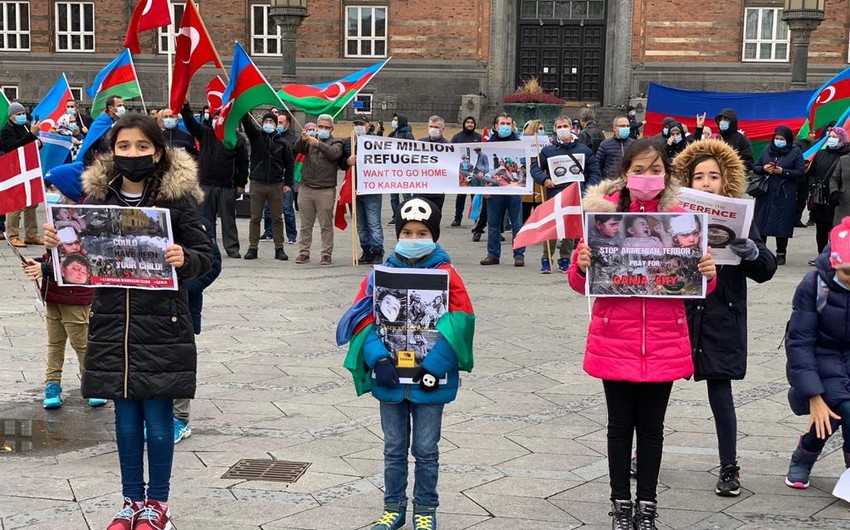 Azerbaijanis living in Denmark held a protest rally in Radhuspladsen Square in front of the Copenhagen City Hall. Protesters condemned the acts of vandalism by the Armenian armed forces in Ganja and other settlements of the country, killing civilians, including children and women, the press service of the State Committee on Work with Diaspora told Report.

Representatives of the Turkish community also took part in the action initiated by our compatriots.

Professor of the University of Copenhagen, Director of the International Headache Society Massoud Ashina, head of “Vatan” Society Safar Sadigi, lawyer Emil Igidov, Aytaj Imanova, Leyla Huseynova, President of the Scandinavian Turkish Federations Ilhan Esen, Turkish Ambassador to Denmark Ugur Kanan Ipek spoke about the realities of Karabakh, the Khojaly genocide, the Ganja terror, and called on the world community not to be indifferent to the deaths of innocent children.

As a result of rocket fire in Ganja, they lined up children’s beds symbolically to commemorate the innocent babies killed in their hotbeds. Candles were lit on the grounds, toys and flowers were placed.

The protestors sang the National Anthem of the Republic of Azerbaijan on the square where the Azerbaijan, Turkey, and Denmark flags were waved. In different languages, slogans were chanted. For example, Karabakh is Azerbaijan !, Ganja is not a frontline zone !, Stop Armenian terrorism !, Stop child death !, We say no to terrorism, Do not support the aggressor state !, Armenia, comply with UN resolutions!