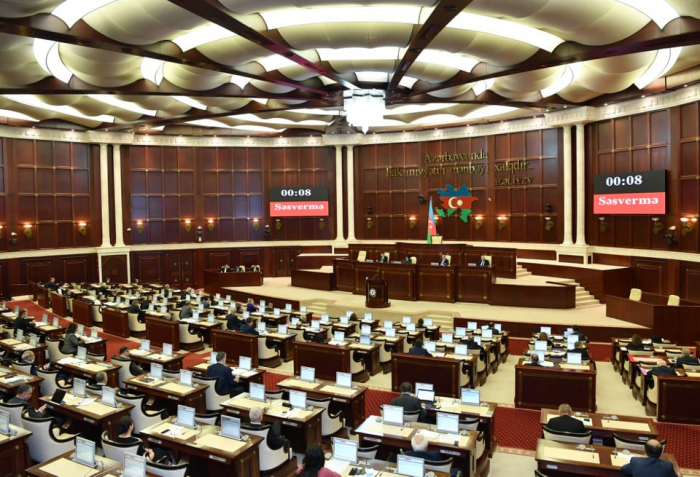 Amendments to the state budget of Azerbaijan for 2020 were discussed at an extraordinary meeting of the Azerbaijani parliament held on Thursday.

Based on calculations carried out given the updated macroeconomic forecasts for the current year, the revised state budget revenues for 2020 are envisaged in the amount of 24.124 billion manat ($14.19 billion), which is 35.3 percent of GDP.

After the proposed changes, the consolidated budget revenues will be nearly 5 billion manat ($2.94 billion) less than the current ones, and the consolidated budget deficit will amount to 8.436 billion manat ($4.96 billion). The decrease in the state budget deficit is due to the reduced domestic demand for petroleum products, as well as the introduction of incentives on some taxes.

Following the discussions, the amendments were put to a vote and adopted in the second reading.

Fuad Akhundov: Azerbaijan does not encroach into a single inch of foreign territory.

There is no doubt that Azerbaijan will fully restore its territorial integrity before winter. Report…

Nagorno-Karabakh issue can only be solved if Armenia’s occupation ends: Turkish presidential spokesperson

Researchers from UCLA and China have found that catalase, a naturally occurring enzyme, holds potential…

Polish MP: International law requirements on Karabakh must be met

“I have always believed, all conflicts that have been frozen for many years, especially the…

A Japanese man has pleaded guilty to murdering nine people after contacting them on Twitter,…

It is a completely legal, and it is a religious right of the Azerbaijan Republic…

The official telegram channel of the Ministry of Defense of the Republic of Azerbaijan (https://t.me/Azerbaijan_MOD)…

EU Summit to start today – Nagorno-Karabakh conflict to be discussed

An extraordinary summit of EU will start discussions in Brussels today. Note, tensions in Nagorno-Karabakh…

Azerbaijan’s Permanent Mission made speech at a special meeting of the OSCE Permanent Council, according…

Armenia continues to commit acts of terrorism against the civilian population

14:27 ‘Life on Venus’ plot thickens as new discovery indicates NASA may have found phosphine as far back as 1978, but didn’t realize it

14:27 Armenia’s coronavirus cases near to 51 thousand

13:26 Fuad Akhundov: Azerbaijan does not encroach into a single inch of foreign territory.

12:02 Nagorno-Karabakh issue can only be solved if Armenia’s occupation ends: Turkish presidential spokesperson

11:39 Polish MP: International law requirements on Karabakh must be met

11:13 What you need to know about bloody conflict over long-disputed region of Nagorno-Karabakh (MAP)

10:52 EU Summit to start today – Nagorno-Karabakh conflict to be discussed

10:43 Armenia continues to commit acts of terrorism against the civilian population

10:26 Iran does not allow transfer of weapons to Armenia via its land – Foreign Ministry

09:55 Italian minister, US Secretary of State speak about Nagorno-Karabakh

09:43 During the night battles, artillery strikes were inflicted on Armenia – VIDEO

09:04 Shootout in US injures some people