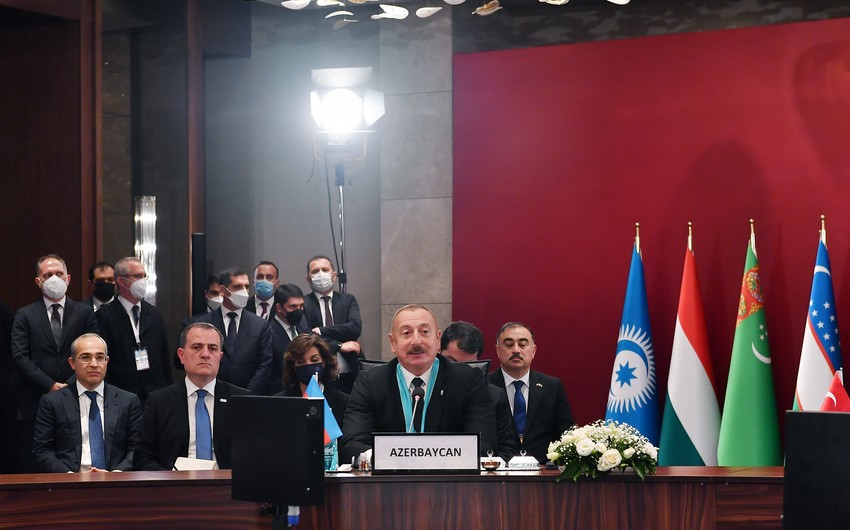 “My dear brother, esteemed President, dear heads of states and governments, I want to thank all of you once again for this. What is symbolic is that the Highest Order of the Turkic World is awarded to Azerbaijan when the presidency of the Turkic Council is handed over to Turkey,” Azerbaijani President Ilham Aliyev told the VIII Summit of the Cooperation Council of Turkic Speaking Countries in Istanbul on November 12, Report informs.

“At the same time, this is an appreciation of our work over the past two years, and my dear brother Recep Tayyip Erdogan has already assumed the presidency of the Turkic Council and the Organization of the Turkic States. I am confident that under his leadership, the unity between our countries, relations based on solidarity, mutual respect and love will be further strengthened, and I have no doubts that the esteemed president, the leader of the Turkic world, will succeed in this endeavor. Because thanks to his policy and leadership, Turkey has come a long and glorious way in recent years, has become a center of power on a global scale and an influential actor not only in the region but also in the world.”

I think that there is no one in the world now who does not know the strength of Turkey – its political, economic, military power, and thanks to the leadership of my dear brother, the development of Turkey, ensuring stability in Turkey is an important condition for the whole Turkic world. Because it is a strong Turkish state at the center of the Turkic world.