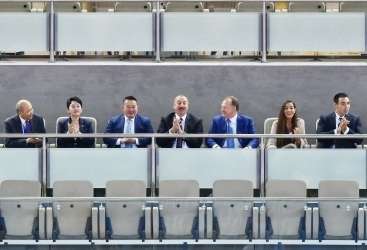 President of the Republic of Azerbaijan Ilham Aliyev and his family members, President of Mongolia Khaltmaagiin Battulga and President of the International Judo Federation Marius Vizer have watched fights of the World Judo Championships at the National Gymnastics Arena in Baku.
Azerbaijan’s Ushangi Kokauri (+100kg) progressed to the final of the championships. On the way to the final, Kokauri defeated Belarus Uladzislau Tsiarpitski, Polish Maciej Sarnacki, Czech Lukas Krpalek and Uzbek Bekmurod Oltiboev. He won silver after losing to Georgian Guram Tushishvili in the final bout.

The tournament brought together 460 male and 298 female judokas from 125 countries.