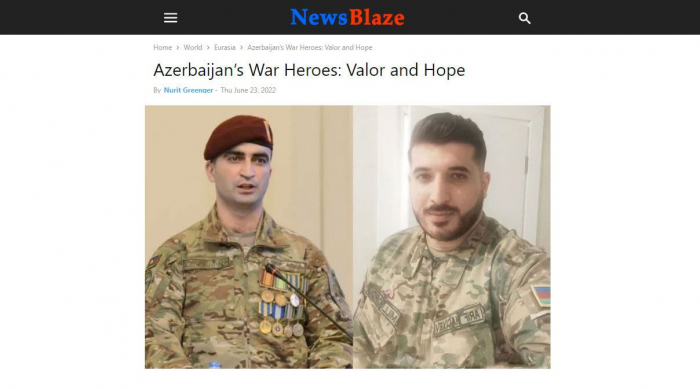 The NewsBlaze online newspaper published an article devoted to the Azerbaijani government’s activities to support the second Karabakh war veterans and people with disabilities.

According to the article, the YASHAT Foundation provides full support to veterans through involving foreign doctors in their recovery process.

Thus, the author of the article interviewed two veterans who received assistance through the foundation.

One of them is 24-year-old Arif Hajiyev who sustained an arm and an eye injury. The article noted while all other wounded soldiers who suffered eye injury received a prosthetic eye from the Israeli team of doctors, Arif was the only one to receive a donor’s cornea.

Speaking of the state support for his recovery, Hajiyev noted that he didn’t only receive the best medical attention, but also was provided with a car, a house, and financial assistance provided by YASHAT.

Another war veteran, Captain Vasif Dilavarzadeh, who served in Azerbaijan’s military for 11 years. He also fought in the April 2016 battles in addition to the second Karabakh war.

Participating in the battles for Murovdag in 2020, Dilavarzadeh was seriously wounded in the leg and had to undergo seven surgeries.

Addressing his countrymen, Vasif Dilavarzadeh said: “I wish peace for the next generation. However, be ready to defend your country.”