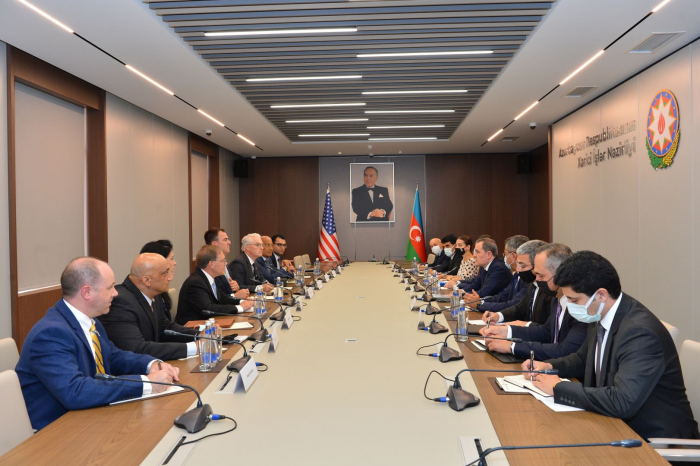 On July 27, 2021, Foreign Minister Jeyhun Bayramov received a delegation led by the Governor of the U.S. state of Oklahoma Kevin Stitt.

Warmly welcoming the Governor of Oklahoma, Minister Bayramov spoke about the mutually beneficial cooperation between Azerbaijan and the United States. Noting that the United States till now supported major projects initiated by Azerbaijan, including energy projects, the minister referred with satisfaction to the country’s participation in peacekeeping operations, cooperation in border security, humanitarian and etc. spheres between the sides.

Stitt expressed satisfaction with his visit to Azerbaijan. He noted that a very good meeting was held with the President of the Republic of Azerbaijan. Noting that during the visit, in addition to official meetings, there will be an opportunity to visit the regions, the governor also stressed the opportunity to consider cooperation and investment prospects in specific areas.

During the meeting, Minister Bayramov gave detailed information to the opposite side about the history of Armenia’s aggression policy against Azerbaijan, the position of the international community on this issue, the situation in the region after the signing of the trilateral statement on November 10, 2020, the scale of destruction in the liberated territories, landmine threat, the reasons for tension on the border, restoration and reconstruction works carried out in the liberated areas.

The opposite side was also informed about the opportunities for cooperation between Azerbaijan and the United States given the new realities in the region, including in agriculture, mining, tourism, alternative energy and other spheres.

At the meeting, the sides also exchanged views on other issues of mutual interest.