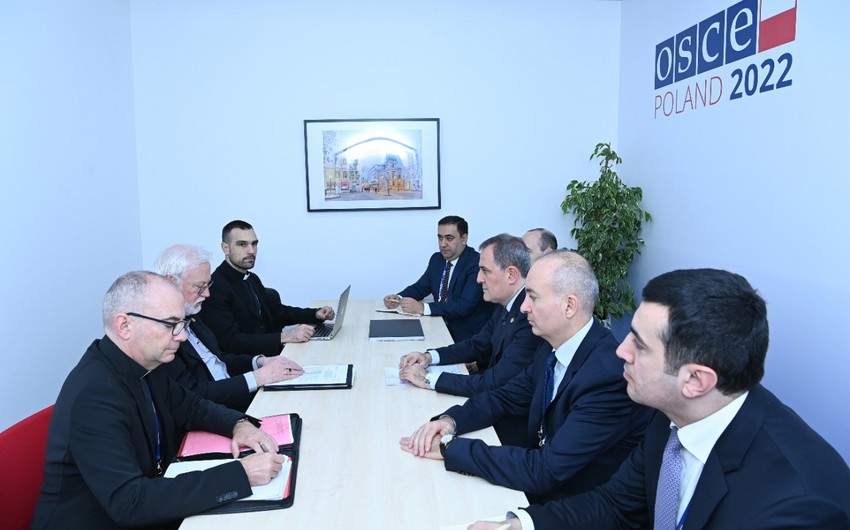 During the conversation, the sides noted the high level of Azerbaijan-Vatican relations and the regularity of bilateral meetings.

Minister Jeyhun Bayramov stressed that Azerbaijan attaches great importance to the relations between the two countries, and in this regard, Azerbaijan’s separate embassy in the Vatican will start operating. He voiced confidence that this will serve the further development of cooperation.

Bayramov also informed the other party in detail about the situation after the 44-day Patriotic War and the crimes committed against nature, vandalism, and destroyed cultural and religious heritage in Azerbaijani territories freed from occupation. He noted that Azerbaijan is carrying out the restoration of infrastructure, transport, and communication lines in the liberated territories. At the same time, detailed information was provided about the mine threats and other provocations committed and continued by Armenia. He pointed out that there is still no information about more than 3,800 Azerbaijanis missing since the early 1990s.

Bishop Paul Richard Gallagher expressed his hope that relations between Armenia and Azerbaijan will be normalized and peace will be restored. He emphasized that the opening of the Embassy of Azerbaijan in the Vatican is an important step and noted the need to increase efforts to expand relations further.

Over 63,000 hectares cleared of mines in Azerbaijan

Allahshukur Pashazada: About 40 million Azerbaijanis are prisoners of Persian regime in Iran

About 40 million Azerbaijanis are prisoners of the Persian regime in Iran, the chairman of…

State Department official: US ready to cooperate with Azerbaijan in demining

Vugar Suleymanov, Chairman of the Management Board of the Mine Action Agency of the Republic…