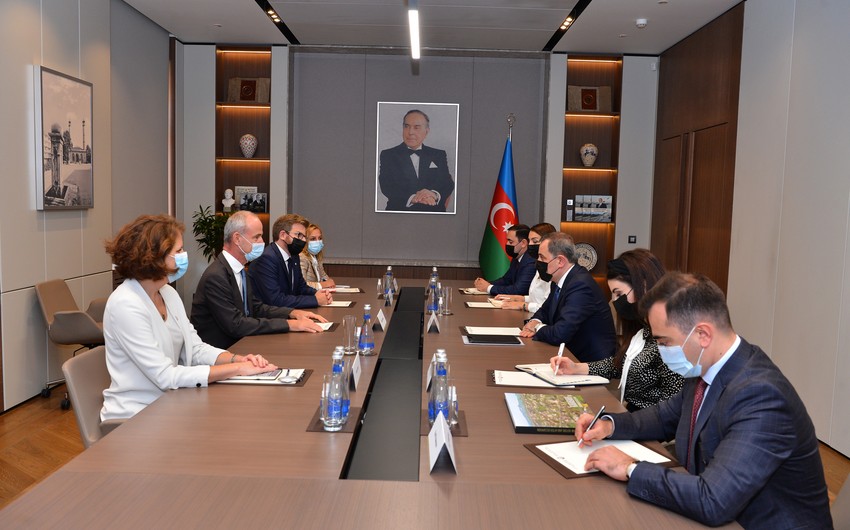 Azerbaijani Foreign Minister Jeyhun Bayramov has received a delegation led by Vice-President of the International Committee of the Red Cross (ICRC) Gilles Carbonnier.

During the meeting, Bayramov praised the country’s fruitful cooperation with the ICRC, the Foreign Ministry told Report.

He said that a number of meetings with the other side over the past year, including at the ICRC office in Geneva, as well as within international platforms, are a clear example.

It was noted that Azerbaijan has always supported the implementation of the ICRC’s humanitarian mission in Azerbaijan in accordance with international law and the relevant UN resolution, and stressed the importance of continuing dialogue with the other side.

Bayramov briefed the other side on the new realities in the region after the conflict and the concrete steps taken by Azerbaijan in connection with the implementation of the trilateral statements of November 10, 2020, and January 11, 2021.

ICRC Vice-President Gilles Carbonnier expressed satisfaction with the support and cooperation provided by the Azerbaijani government to the organization’s activities. They stressed the importance of continuing cooperation on the basis of existing humanitarian priorities, taking into account the new realities in the region.

At this stage, the vice-president discussed with Azerbaijan early recovery, health, training of medical workers, as well as the involvement of new technologies in humanitarian activities, etc. He spoke about the implementation of activities in the following areas. He also praised the work done by Azerbaijan to return Azerbaijani citizens from the Middle East, especially women and children.

Bayramov said it was important for our country to obtain information about missing Azerbaijanis, and praised the work of the ICRC in collecting information on missing people from the first Karabakh war.

The sides also exchanged views on the ICRC’s humanitarian mission in the region.