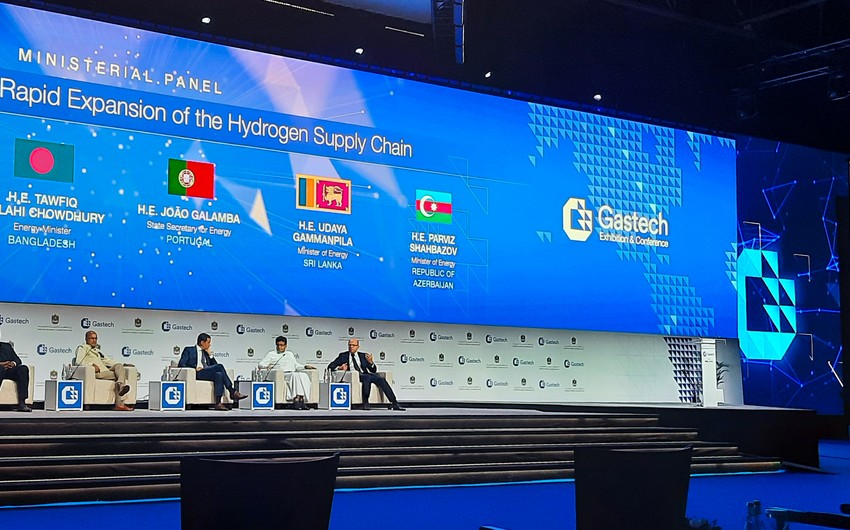 The event is being held in Dubai on September 21-23 with the participation of more than 300 high-ranking officials, including politicians, businessmen and experts.

The minister made a speech at the Ministerial Panel on “Policy to Support the Rapid Expansion of the Hydrogen Supply Chain.” The minister of energy stressed that climate change is a reality contributing to the global energy transition and highlighted the importance of urgently expanding the use of green energy to achieve a balance between energy security and environmental security. It was noted that the effectiveness of the energy transition process necessitates a broad dialogue between energy producers and consumers.

Shahbazov also spoke about the measures taken in Azerbaijan in connection with the energy transition process, projects and prospects in the field of renewable energy.

“The goal of Azerbaijan, which is an exporter of traditional energy resources, is to bring the share of renewable energy in total installed capacity of electricity to 30 percent by 2030. President of the Republic of Azerbaijan Ilham Aliyev defined achieving a ‘clean environment’ and becoming a ‘green growth’ country by 2030 as one of five National Priorities for Socio-Economic Development, which is an indication of our strong commitment to the energy transition,” the minister said.

It was also noted that investment and implementation agreements with leading international wind and solar energy companies had been signed in Azerbaijan recently, and auctions for renewable energy are planned to be held in the near future.

Read more:   43.9% of respondents plan to get COVID passport - SURVEY

Within the event, Shahbazov also took part in the Gastech Awards 2021, where the Trans-Adriatic Gas Pipeline (TAP) was named the winner in the “Gas, LNG, or Hydrogen Project of the Year” category.