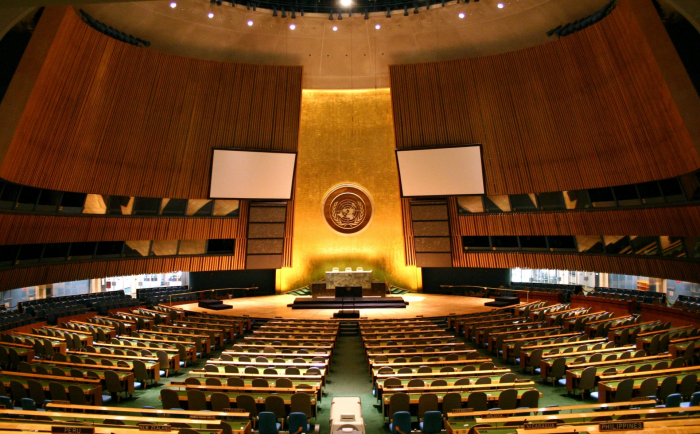 The Delegation of Azerbaijan to the United Nations has made a statement to reply to the statement by the Prime Minister of Armenia at the General Debate of the 75th session of the UN General Assembly.

“As is well known, in early 1990s, Armenia used military force against Azerbaijan to fulfill its long-nurtured plan of seizing the territory of Azerbaijan. This was well prepared. As a result, a significant part of Azerbaijan’s territory, including Nagorno Karabakh, the seven adjacent districts and some exclaves, was seized by Armenia and remain under its occupation. The war claimed the lives of tens of thousands of people and caused considerable destruction of civilian infrastructure and property in Azerbaijan. The occupied territories were ethnically cleansed of all Azerbaijanis; more than 1 million people were forced to leave their homes in these territories.

Attempts by the Armenia to disguise its unlawful claims and actions by speculations with self-determination are fundamentally flawed and have nothing in common with that principle, as it is set forth in the Charter of the United Nations, the 1975 CSCE Helsinki Final Act and other related international documents.

In their statements regarding the conflict settlement process, the international mediators specifically refer to the Helsinki Final Act, which, inter alia, obliges the participating states, including Armenia, to “respect the equal rights of peoples and their right to self-determination, acting at all times in conformity with the purposes and principles of the Charter of the United Nations and with the relevant norms of international law, including those relating to territorial integrity of States.

Moreover, self-determination claims are unsustainable when they are accompanied by violation of international law, in particular its peremptory norms (jus cogens), such as those prohibiting the threat or use of force against the sovereignty and territorial integrity of states.

Armenia’s allegation that the so-called “authorities” of Nagorny Karabakh should take part in the negotiations does not stand up to criticism. Having succeeded in expelling all Azerbaijanis from the Nagorno-Karabakh region, Armenia established the puppet regime on the occupied lands. However, in its relevant documents and decisions, the OSCE recognizes that the population of this region of Azerbaijan consists of two equal communities, namely, the Azerbaijani and Armenian communities. None of these or any other documents and decisions designates the Armenian community as “elected authorities”.

Over the past two years, we have witnessed consistent attempts by the leadership of Armenia to derail the peace process, including by attempting to undermine the format of negotiations. It prompted the Co-Chairs of the OSCE Minsk Group to issue a statement on 9 March 2019, in which they urged to refrain from demanding unilateral changes to the format.

Moreover, the illegality of the puppet regime set up by Armenia in the occupied territories of Azerbaijan has been repeatedly stated at the international level; it is under Armenia’s direction and control and is ultimately nothing other than the product of aggression, ethnic cleansing and other atrocity crimes committed against Azerbaijanis on racial, ethnic and religious grounds.

In its unanimously adopted resolutions 822 (1993), 853 (1993), 874 (1993) and 884 (1993), the United Nations Security Council not only did not mention the existence of the so-called “people of Nagorno-Karabakh” and its “right to self-determination”, but condemned the use of force against Azerbaijan and the occupation of its territories; reaffirmed respect for the sovereignty and territorial integrity of Azerbaijan and the inviolability of international borders; confirmed that the Nagorno-Karabakh region is part of Azerbaijan; and demanded the immediate, complete and unconditional withdrawal of the occupying forces from all the occupied territories of Azerbaijan. The numerous documents of other international organizations, expressing the unified position of the world community, are framed along the same lines.

It is no surprise that the Armenian authorities refrain from mentioning the resolutions of the Security Council and other relevant international documents, which constitute the legal and political frameworks for the conflict settlement.

Evidently, the public pronouncements by the Armenian authorities expressing commitment to the exclusively peaceful settlement are nothing other than a hollow rhetoric and smokescreen to camouflage the clear-cut annexationist objectives. Actually, having used military force to occupy the territories of Azerbaijan, Armenia has demonstrated its firm conviction in the existence of an alternative to peace.

In July 2020, the armed forces of Armenia, in blatant violation of international law, launched cross-border attacks against Azerbaijan, with the use of artillery and mortars, directly targeting the densely populated areas. As a result, a 76-year-old civilian and 12 officers and soldiers of the armed forces of Azerbaijan were killed, and many were wounded. Serious damage was inflicted upon the civilian facilities in the area.

Even the devastating impact of the COVID-19 pandemic has not prevented Armenia from its armed provocation. It is apparent that Armenia’s statement on its support for and adherence to the appeal of the United Nations Secretary-General for a global ceasefire is nothing other than utter falsehood. No doubt, Armenia’s objective is not to save lives and alleviate the sufferings of people in need, but to expand and secure its aggression and annexation.

Armenia’s insinuations about the alleged threat of “nuclear terrorism” are particularly astonishing given its own solid track record of attacks on civilians and bombardment of inhabited areas in Azerbaijan and its persistent threats to use force against civilian infrastructure. Azerbaijan has clearly stated, at the appropriate level, that our armed forces have never had plans to attack civilian objects and strictly comply with international humanitarian law. Unlike Armenia, Azerbaijan acts exclusively within the purview of its right of self-defense, in accordance with the Charter of the United Nations and customary international law.

With regard to human rights and democracy, the Armenian authorities should first look closely at themselves, rather than blame other countries. Indeed, all successive governments in Armenia, including the current one, have come to power through force, and have resorted to the cruelest possible methods of dealing with political opponents. The crackdown on the opposition, politically motivated killings, limited freedom of media, interference in the judiciary and the undisguised promotion of the odious ideas of ethnic incompatibility and hatred towards Azerbaijan and other neighboring nations are bitter realities in today’s Armenia.

Armenia continues to pose a serious threat to regional and international peace, security and stability, thus necessitating the urgent action by the international community. The foundation and objective of durable peace is to ensure the immediate, complete and unconditional withdrawal of the Armenian occupying forces from the Nagorno Karabakh region and other occupied territories of Azerbaijan, the restoration of the territorial integrity of Azerbaijan within its internationally recognized borders and the return of the forcibly displaced persons to their homes. The achievement of that objective is a must, not a compromise.”

New Everton star James Rodriguez, who has been lauded as the best player in the…

Washington has refuted reports claiming it was preparing a drone attack on disputed Chinese islands,…