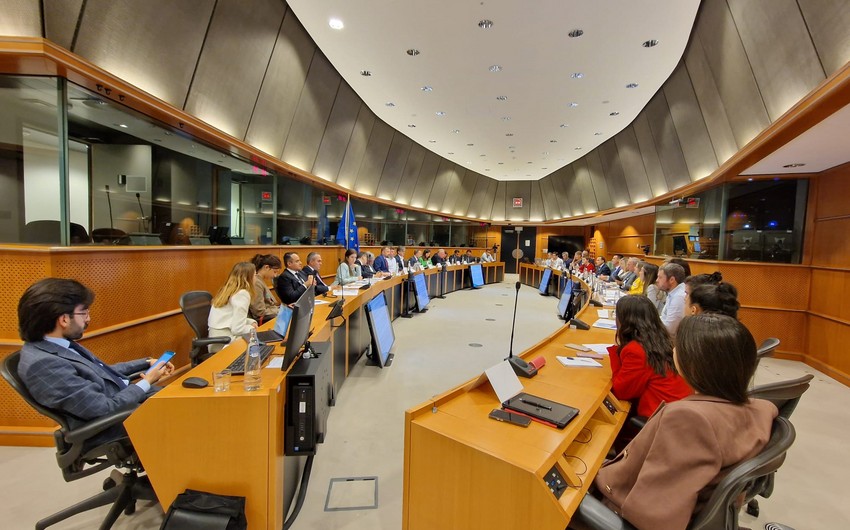 Azerbaijani delegation consisting of Samir Poladov from the Azerbaijan National Agency for Mine Action (ANAMA), Sultan Hajiyev from the Interdepartmental Center of the Coordination Headquarters for rehabilitation and reconstruction of the liberated territories, Jafar Huseinzadeh and Vugar Gurbanov from the Ministry of Foreign Affairs paid a working visit to Belgium and Switzerland on June 20-24.

During the visit, the Azerbaijani delegation held a series of meetings with representatives of several EU institutions and EU member states, the Kingdom of Belgium and Switzerland officials, and NATO and UN agencies, Report informs.

The primary purpose of the meetings was to inform about the problem of humanitarian mines in the liberated territories of Azerbaijan and its obstacles to reconstruction, as well as the return of former IDPs, large-scale demining activities in the country, future goals, discussions on current and future cooperation.

The delegation participated in an event organized by the Sustainable Value Hub in Brussels at the European Parliament on “Tackling landmines in the EU neighbourhood: Evolving threats and the need for enhanced cooperation”. Deputy Chairman of ANAMA Samir Poladov made a presentation at the event and informed the participants about the existing mine problem in the liberated territories of Azerbaijan, its effects, mine victims, the work done by the Azerbaijani government, the importance of international cooperation and support.

During the meeting with the relevant NATO agencies, they expressed satisfaction with the long-term successful cooperation with ANAMA. They praised Azerbaijan’s activity and experience in clearing mines and unexploded ordnance and expressed interest in continuing cooperation in this area. During the meetings, they stressed the serious mine threat faced by Azerbaijan after the 44-day war and the need and importance of the international community’s attention to this threat.