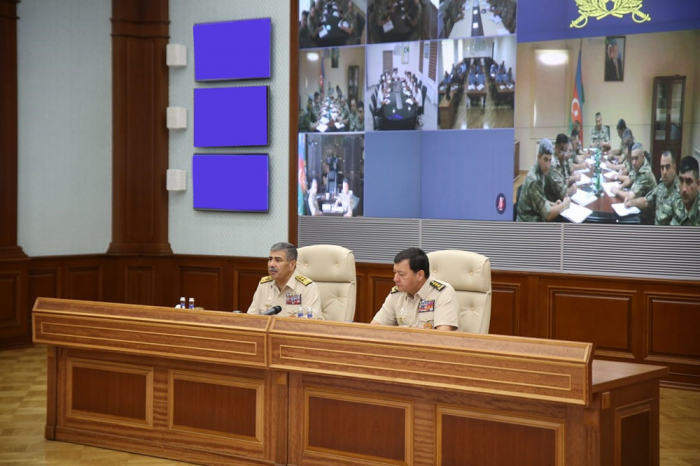 Azerbaijani Defense Minister, Colonel General Zakir Hasanov on Tuesday chaired an official meeting with the participation of deputy defense ministers, commanders of types of troops, chiefs of the ministry’s departments and commanders of Army Corps.

Commanders of formations and other officials joined the meeting via the video communication, the Defense Ministry reported.

The minister conveyed his congratulations on the occasion of the Armed Forces Day to the meeting participants and emphasized that the whole military personnel of the Azerbaijani army perceived with deep feeling of gratitude and with high spirit the order signed by President, Supreme Commander-in-Chief Ilham Aliyev to enhance the social protection of servicemen.

The minister expressed confidence that the work carried out by the state in this area will be continued.

Hasanov assigned tasks for officials to pay special attention to the implementation of strict control over the operational situation on the line of contact (LoC) of troops, to increase vigilance and ensure the security of military personnel.

The minister taking into account the weather conditions also gave instructions in regard to the prevention of cases of heat and sunstrike among the military personnel, increasing attention to his health and the adoption of fire safety measures in military units.