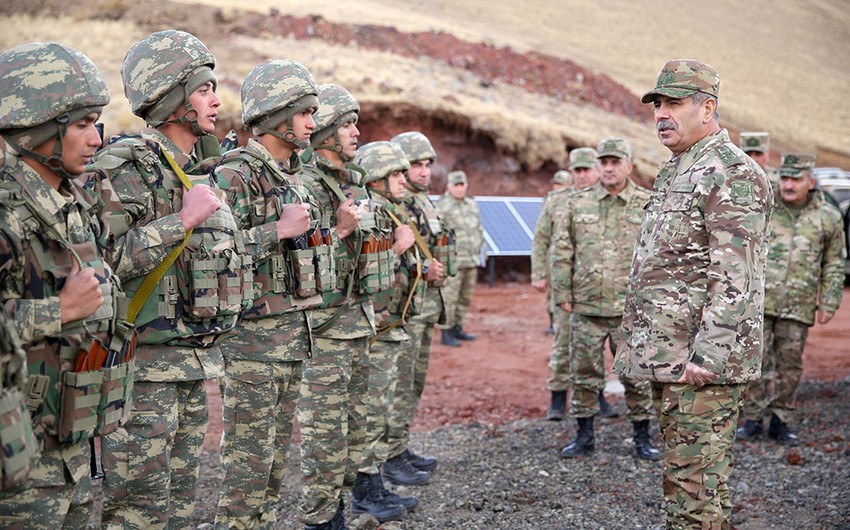 Thanks to the attention and care of Azerbaijani President, Supreme Commander-in-Chief of the Armed Forces Ilham Aliyev, activities continue to improve the social and living conditions of the servicemen of the Azerbaijani army serving in the highlands, the Defense Ministry told Report.

The leadership of the Defense Ministry inspected several combat positions located in the Kalbajar and Lachin districts, and also inquired about the social and living conditions of the servicemen there.

The defense minister was reported that all the needs of the personnel at the modular-type deployment points, consisting of containers and built at an altitude of 3,400 meters on the state border, including at combat positions, located in other parts of Kalbajar and Lachin districts, were met.

At these points, there are weapons rooms, canteens, kitchens, food and storage warehouses, bath and sanitary facilities, as well as barracks equipped with heating stoves. In order to provide the area with an uninterrupted power supply, generators and solar panels have been installed.

It was noted that all the necessary conditions have been created for the high-quality organization and conduct of combat duty at night and during the day. The positions are equipped with technical surveillance equipment.

Colonel-General Zakir Hasanov, observing the actions of the enemy from the command-observation post, gave additional instructions on the organization and conduct of combat duty.

The defense minister, appreciating the conditions created for the military personnel and their moral and psychological readiness, expressed satisfaction. The minister set the appropriate tasks for the command to improve social conditions and further increase the combat efficiency of the personnel.