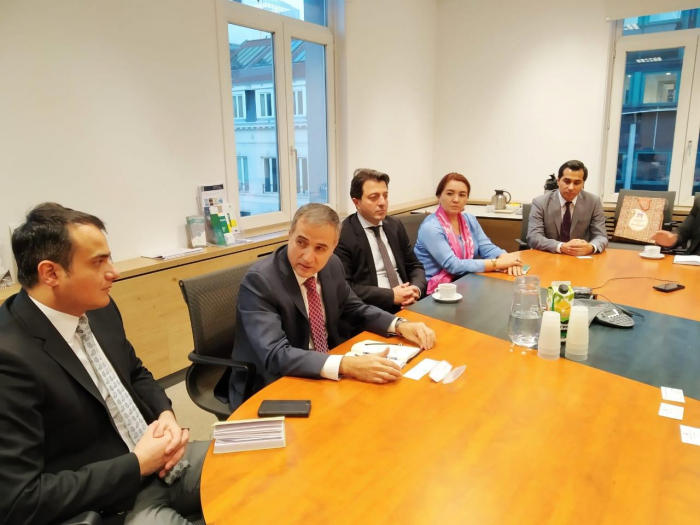 The Azerbaijani community of Azerbaijan’s Nagorno-Karabakh region has expressed a protest against the visits paid by some members of the European Parliament to the Azerbaijani territories occupied by Armenia.

This issue was in the spotlight during meetings of the community delegation at Azerbaijan’s Center for International Relations Analysis in Brussels.

At the meetings with the member of the European Parliament, Chairman of the Euronest Andrius Kubilius, Deputy Chairperson of the EU-Azerbaijan Parliamentary Cooperation Committee, MEP Rasa Jukneviciene and Head of Centre for European Policy Studies (CEPS) Karel Lannoo, it was emphasized that the illegal visits of some MEPs to Nagorno-Karabakh without Azerbaijan’s permission seriously undermine the authority of this structure.

MEPs noted that they are closely following the negotiations conducted through the mediation of the co-chairing countries of the OSCE Minsk Group on the settlement of the Armenia-Azerbaijan Nagorno-Karabakh conflict.

Read more:   Ali Hasanov: By 2020, poverty rate to drop to zero in Azerbaijan

At the meetings in Brussels, Azerbaijan’s role in the energy market of Europe was especially emphasized. It was noted that the measures taken by both parties to strengthen Azerbaijan’s influence in the field of Europe’s energy security, the development of relations between the EU and Azerbaijan, are of great importance.

The conflict between the two South Caucasus countries began in 1988 when Armenia made territorial claims against Azerbaijan. As a result of the ensuing war, Armenian armed forces occupied 20 per cent of Azerbaijan, including the Nagorno-Karabakh region and seven surrounding districts.

An Azerbaijan soldier Ibrahim Valiyev, who was martyred by Armenian armed forces, has been laid…

Azerbaijani Cabinet of Ministers talks on ongoing measures against coronavirus

Ministers of Health of Azerbaijan and Turkey discuss coronavirus

Following the official welcome ceremony in Baku, President of the Republic of Azerbaijan Ilham Aliyev…