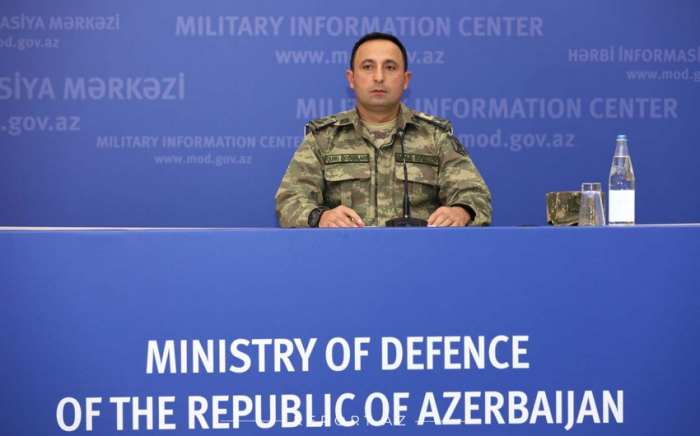 The military units of the Azerbaijani Army adhere the next humanitarian ceasefire regime along the entire frontline, which came into force on October 26 at 08.00 under the instructions of the Supreme Commander-in-Chief, President Ilham Aliyev, said spokesman for the Defense Ministryof Azerbaijan, Lieutenant-Colonel Anar Eyvazov at a briefing.

Anar Eyvazov stated that the Armenian Armed Forces violated the new humanitarian ceasefire a few minutes after the ceasefire came into force at 08.05. The Armenian Army fired at Tovuz, Gadabay and Dashkesan districts of Azerbaijan from Berd, Chambarak and Vardenis districts of Armenia with various types of firearms, mortars and cannons. Earlier, at 18:15, the opposite side shelled the Terter city from the Smerch rocket launcher. One of the three missiles fired was neutralized by the air defense units of Azerbaijan. In total, more than 200 projectiles were fired at the cities of Azerbaijan, including Terter.

The Defense Ministry spokesman noted that the information spread by the Armenian side about the alleged shelling of the Chanagchi village in the Khojaly region by the Azerbaijani Army, as well as the alleged destruction of an unmanned aerial vehicle on the front line, is false. On the contrary, the Azerbaijani Army destroyed Armenia’s quadcopter trying to fly over the positions of the military units in the Dashkesan region in the Armenian-Azerbaijani border.

“Armenia, which is running out of manpower, is trying to involve more volunteers, mercenaries and foreign terrorist fighters, including children, in the battles. In this case, it is practically impossible for the opposite side to control the situation on the battlefield. The Azerbaijani army is ready for a full-scale battle to prevent any attacks and provocations by the Armenian Army,” Eyvazov added.

Ukraine has the same perspective and objectives in the conflict of Nagorno-Karabakh as Turkey, Kyiv’s…

“The resolution adopted by the French Senate is symbolic.” French historian Maxime Gauin told the…