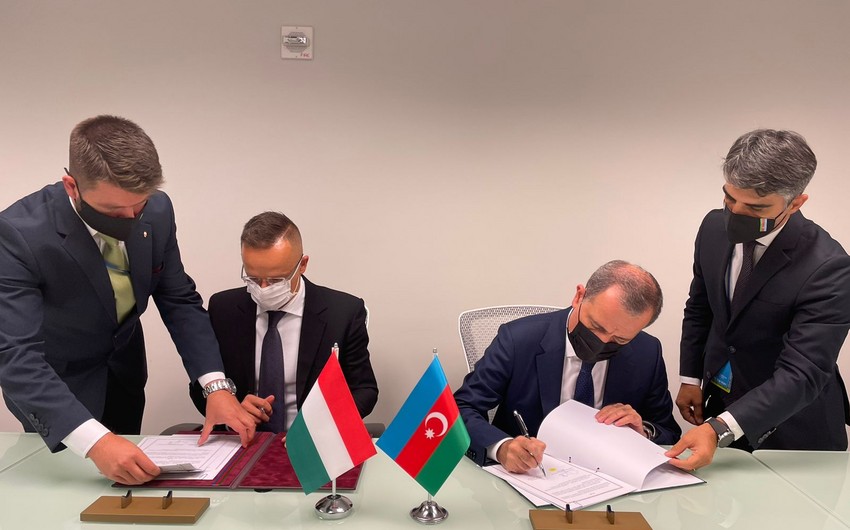 At the outset of the meeting, the Azerbaijani and Hungarian National Archives Departments signed an agreement on cooperation in the field of archives.

They expressed satisfaction with the strategic nature of the relations between Azerbaijan and Hungary, emphasizing that the peoples’ relations are based on historical roots.

The ministers also exchanged views on cooperation between the two countries in transport, energy, tourism, and other sectors.

Foreign Minister Jeyhun Bayramov filled his counterpart in on the current regional situation, new opportunities for cooperation in the post-conflict period, as well as the restoration work carried out by the Azerbaijani government in the liberated regions.

Hungary expressed interest in participating in the process of restoration and construction of the conflict-affected areas.

Peter Szijjarto said that Hungary attaches great importance to the development of relations with the friendly country Azerbaijan and cooperation between the two countries in the political, economic, cultural, and humanitarian spheres is growing.

Speaking about the broad cooperation between Hungary and Azerbaijan in the energy sector, the minister underscored that Azerbaijan is a reliable partner in the energy security sector and plays a crucial role in ensuring the diversification of energy supply routes to Europe.

The further development of the relations between the two countries, as well as other issues of mutual interest, were discussed at the meeting.