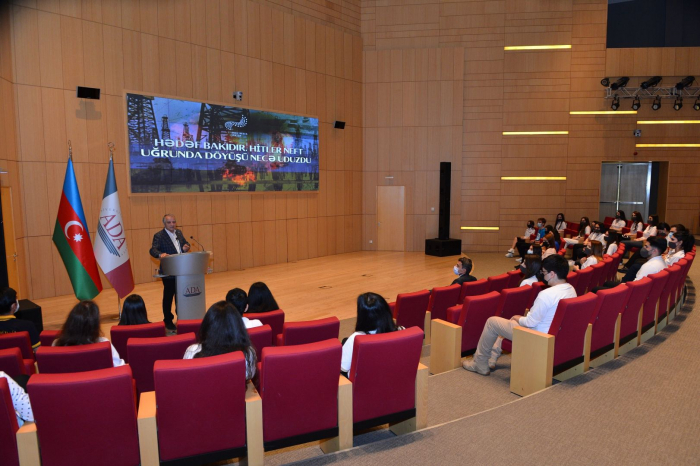 ‘Target – Baku. How Hitler Lost Battle for Oil’ film was screened at the ADA University timed to the 76th anniversary of the Victory over fascism in World War II for members of volunteer organizations and movements operating in Azerbaijan, according to the Azerbaijani Foreign Ministry.

According to the ministry, the film was made with the support of the Heydar Aliyev Foundation. Main producer of the film is the president of the Baku-Media Center Arzu Aliyeva.

The event was organized with the joint support of the Foreign Ministry and ADA University.

Before the screening of the film, a photo exhibition was held on the participation of the Azerbaijani people in World War II and their role in the achievement of Victory over fascism.

At the event, the vice-rector of the university Fariz Ismayilzade and spokesperson for the ministry Leyla Abdullayeva spoke about the courage shown by Azerbaijanis during the war and stressed the importance of deep study of Azerbaijani history.

The speakers noted that for the first time since the restoration of independence, Azerbaijan is celebrating Victory Day on May 9 with extensive pride due to liberation of Azerbaijani territories from Armenian occupation in the Second Karabakh war from late Sept. through early Nov.2020.

The memory of the martyrs was honored with a minute of silence.

After the speeches, the film was shown.