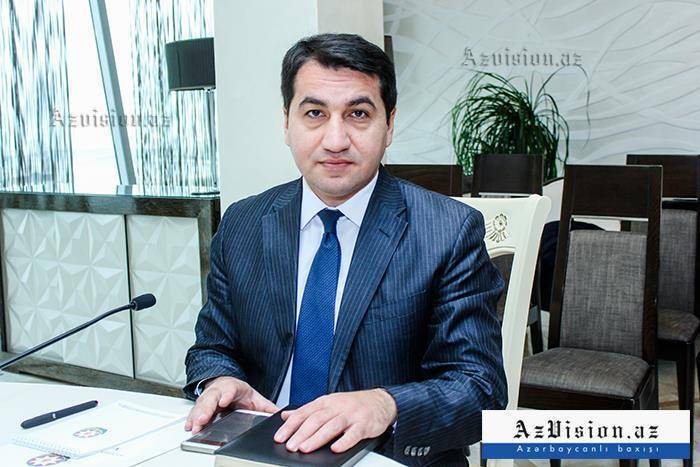 Azerbaijan urges all OSCE Member States to demand in a firm and unequivocal manner from Armenia to comply with its obligations under the Helsinki Final Act and other international legal instruments, cease use of force against Azerbaijan and withdraw its troops from the occupied territories of Azerbaijan, said Azerbaijani Foreign Ministry Spokesman Hikmat Hajiyev.
In his statement on the adoption of the Helsinki Final Act on 1 August 1975, Hajiyev said that this document established ten fundamental principles (the ‘Decalogue’) governing especially the behavior of States towards each other and served for maintenance of peace and security in Europe.

He recalled that in January 1992, the Republic of Azerbaijan joined CSCE, and since then country remains fully committed to its obligations under the Helsinki Final Act.

“As part of this institutionalization process, the name was changed from the CSCE to the OSCE by a decision of the Budapest Summit of Heads of State or Government in December 1994,” reads the statement.

Hajiyev stressed that as the OSCE member state, the Republic of Armenia in blatant violation of its commitments under the Helsinki Final Act by use of force occupied Nagorno-Karabakh and seven adjacent regions of Azerbaijan.

“Armenia conducted notorious ethnic cleansing against Azerbaijani civilian population in the seized lands. Illegal presence of armed forces of Armenia in the occupied territories of Azerbaijan is the continuation of Armenia’s use of force and threat of force policy against Azerbaijan. In order to disguise its illegal actions, especially use of force and threat of force against territorial integrity and sovereignty of Azerbaijan, attempts of annexation of Azerbaijan’s occupied territories and forceful expulsion of civilian Azerbaijani population from their native lands, Armenia by all means tries to distort the principles of equal rights and self-determination enshrined in Helsinki Final Act,” he said.

According to Hajiyev, non-compliance by Armenia with the its Helsinki Final Act and other OSCE obligations and their continuous violation, selective and double standard approaches in application of Helsinki Final Act principles causes for protraction of settlement of Armenia-Azerbaijan conflict through negotiations and maintenance of the risks of military escalation.