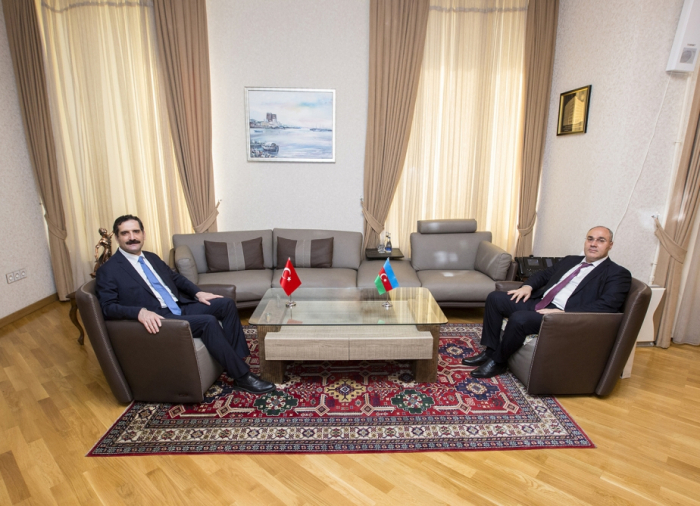 Azerbaijan and Turkey have praised the bilateral cooperation in the field of customs as chairman of the State Customs Committee Safar Mehdiyev met with the outgoing Turkish Ambassador Erkan Ozoral.

Mehdiyev noted the strategic partnership between Azerbaijan and Turkey, saying the purposeful policy pursued by the heads of state of the two countries has played an important role in overall development of relations.

He praised the Turkish ambassador’s contribution to the expansion of cooperation between the two countries in all areas, including customs.

Mehdiyev congratulated Ozoral on being awarded with the Friendship Order by President Ilham Aliyev for his special merits in the development of friendly relations and cooperation between Azerbaijan and Turkey.

Ambassador Ozoral said Azerbaijani-Turkish cooperation has played an important role in the improvement of the welfare of not only the peoples of the two countries, but also the countries of the region.

The Take Off Baku international startup summit has started within the TEKNOFEST International Aviation, Space…

Biden talks the talk, but is the US committed to meeting its international security obligations?

Asia is now the most interesting arena of world politics, and regional powers are looking…

“Something could happen” with the oil pipeline running to Hungary, a Ukrainian official has warned…

18:43 Azerbaijan and Turkey discuss prospects for the development of military cooperation

17:43 Chief Ombudsman of Turkiye: International pressure mechanism must be created against Armenia – INTERVIEW

17:36 Turkey has no plans to stop purchasing gas from Russia at this stage – Cavusoglu

15:40 Flights from Poland to Azerbaijan to be performed four times a week

14:43 Negotiations are underway on production of ‘Akinci’ UAV together with Azerbaijan – Turkish minister

14:17 Ukraine extends agreement with Hungary on gas imports until March 2023

14:14 Technoparks similar to Turkish ones to be established in Azerbaijan

13:56 Mustafa Varank: Analogues of Turkish technoparks to be created in Azerbaijan

13:31 Radio TV station to be commissioned in Azerbaijan’s Hadrut soon

13:27 Turkish Minister: Holding TEKNOFEST in Azerbaijan is of special importance

13:08 ‘It is our message to the world together with Turkey’ – Rashad Nabiyev

13:01 Selcuk Bayraktar: Karabakh is peak of our brotherhood