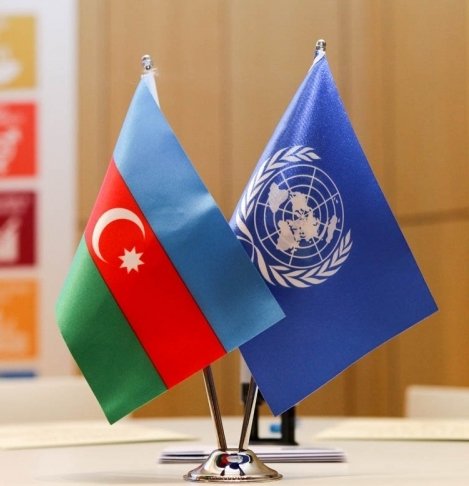 Permanent Representative of Azerbaijan to the United Nations Yashar Aliyev sent a letter to UN Secretary-General Antonio Guterres within discussions on the topic titled ‘Protracted conflicts in the GUAM area and their implications for international peace, security and development’ on May 26.

The letter refers to the so-called “elections” held by Armenia in the occupied Azerbaijani territories on March 31, and strong condemnation of these illegal activities by the international community.

The appeal emphasized that on March 12 and April 14, Armenia held illegal “elections” in the occupied territories of Azerbaijan.

“The “elections” are absolutely illegitimate, because they were held as a result of the ongoing military occupation and ethnic cleansing of Azerbaijani territories. This means a violation of the Constitution and legislation of Azerbaijan, as well as the norms and principles of international law. The world community once again with a majority of votes confirmed the unacceptability of the results of these illegitimate, so-called “elections”, the collective rejection of their validity, and therefore demonstrated a consistent and principled position on the lack of their power of influence.”

Yashar Aliyev added that in connection with this, an updated version of the document was sent as an annex to his letter dated April 15, 2020 (A/74/805-S/2020/301), commenting on the international community’s attitude towards the illegitimate “elections”.

The UN Secretary-General was presented with a list of international and regional organizations, including the Cooperation Council of Turkic-speaking States, the Council of Europe, the European Parliament, the Non-Aligned Movement, NATO, the Organization for Democracy and Economic Development (GUAM), the OSCE Minsk Group, the OSCE PA, the OIC, the PA of Turkic-speaking states, as well as the appeals of many countries to including Australia, Bosnia and Herzegovina, Canada, China, Czech Republic, Estonia, Finland, Georgia, Germany, Iran, Italy, Japan, Latvia, Montenegro, Moldova, Norway, Pakistan, Poland, Romania, Saudi Arabia, Switzerland, Turkey, Ukraine, the UK and the US, condemning the illegal “elections” and confirming the fact of non-recognition of the puppet regime in the occupied territory of Azerbaijan.

Ambassador: Azerbaijan not planning on joining EAEU yet

Kremlin appeals to Armenia and Azerbaijan

Being concerned about the fights on the Azerbaijan-Armenia border, the Kremlin calls the sides to…

“On the night of July 13-14 and in the morning, fierce fighting continued on the…

Murder of an Azerbaijani civilian by the Armenian armed forces is a bloody crime, Trend…

The fighting continues in the direction of Tovuz district on the Azerbaijan-Armenia border, said Vagif…

On the night of July 13-14 and in the morning, fierce fighting continued on the…

On the night of July 13 and 14, fierce battles continued in the direction of…

“On the night of July 13-14, heavy fighting continued in the Tovuz region. During the…

On the night of July 13-14 and in the morning, fierce fighting continued on the…

13:13 ‘The clock is ticking for economic transformation’