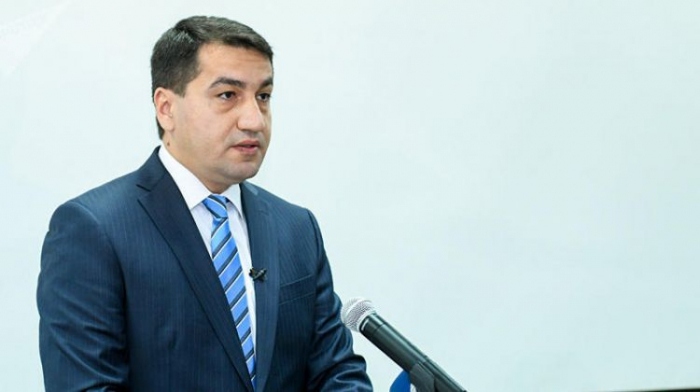 Azerbaijan is seeking cooperation, not competition in the energy sphere, Assistant of the President of the Republic of Azerbaijan, Head of Foreign Policy Affairs Department of the Presidential Administration Hikmet Hajiyev told Radio France Internationale (RFI), according to Trend.

“In its energy strategy, Azerbaijan is not seeking any competition, it is seeking cooperation. We see that there is a room for cooperation. European gas demand is rising and Azerbaijan by its own modest contribution makes exports to European markets. It strengthens European energy security and also contributes to Azerbaijan’s economic development. It is a win-win cooperation,” said Hajiyev.

He went on to add that Azerbaijan is implementing the Southern Gas Corridor project worth $40 billion, which will take Azerbaijani gas from the Caspian Sea to European market.

“Along with pipeline, we are creating new jobs, prosperity and cooperation. Fifty thousands of new jobs have been created from the Caspian Sea up to the Adriatic Sea in different countries. Southern Gas Corridor is an alternative source of energy and alternative route of energy supply,” said Hajiyev.

He recalled that Azerbaijan is the first oil producing country in the world through the industrial way.

“In the mid of the 19th century the first oil well was drilled in Azerbaijan even during the Russian Empire time and since then Azerbaijan provided oil to the international market. Next year, we are going to celebrate 75th anniversary of the victory over Nazism. Azerbaijan’s oil played a crucial role in the fight against Nazism in the World War II. Imagine that 75 percent of oil of the entire Soviet army was provided from Baku,” said Hajiyev.

The Southern Gas Corridor project aims to increase and diversify European energy supply by bringing gas resources from the Caspian Sea to markets in Europe.

Read more:   Azerbaijan to present its nanotechnologies at Iran festival

The Projects have an estimated investment cost of approximately $40 billion. Upon completion, the SD2 project will add a further 16 bcm of natural gas per annum to 10.9 bcma (maximum production capacity) already produced under SD1 project.

Total length of the newly constructed SCPX, TANAP and TAP pipelines will be more than 3,200 kilometres.