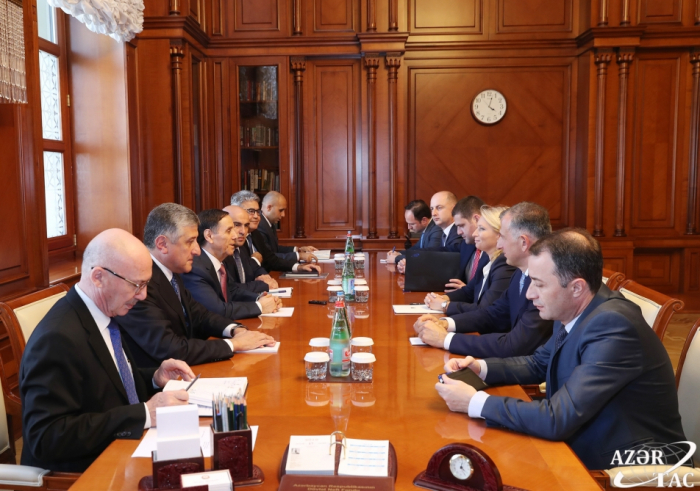 Prime Minister of the Republic of Azerbaijan Novruz Mammadov has met with Minister of Economy and Sustainable Development of Georgia Natia Turnava.

Prime Minister Novruz Mammadov noted that Azerbaijan and Georgia were friendly countries which enjoy close cooperation. “Over the past 27 years, our bilateral relations have been developing in all areas, including political and economic spheres. Our countries have established good relations in the fields of energy, investment making, economy and trade,” the Prime Minister said.

Novruz Mammadov emphasized that Azerbaijan-Georgia-Turkey trilateral cooperation format contributed to ensuring stability and development in the region. Stressing the importance of high-level reciprocal visits in developing relations between the two countries, Novruz Mammadov pointed out that Natia Turnava’s visit would also contribute to the development of the bilateral ties. The Prime Minister noted the significance of holding a meeting of the Joint Intergovernmental Commission on Economic Cooperation between Azerbaijan and Georgia in the near future.

Read more:   Are foot sores a new symptom of COVID-19?

Georgian Minister of Economy and Sustainable Development Natia Turnava noted that she was received by President Ilham Aliyev, and highlighted the friendly relations between the two countries. The minister underlined that there were good opportunities for expanding relations between the two countries in various areas, including transport, logistics, agriculture and tourism.

The sides had a broad exchange of views on the issues of mutual interest.