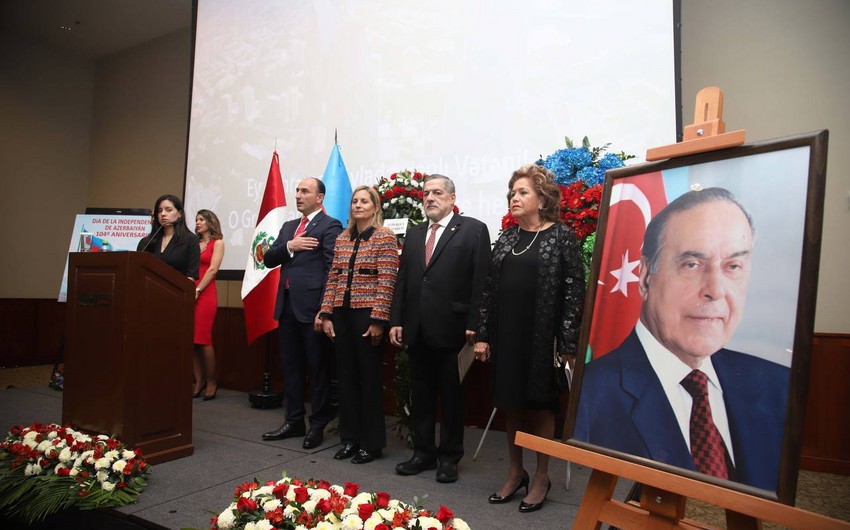 An official banquet was organized in Lima, Peru, on the occasion of May 28 – Independence Day and the 270th anniversary of Shusha, the cultural capital of Azerbaijan, the Azerbaijani Embassy in Mexico told Report.

The Azerbaijani Ambassador to Peru, Mammad Talibov, spoke about the history of the establishment of the Azerbaijan Democratic Republic 104 years ago, the first democratic republic in the East to ensure equal rights for all citizens. He stressed that after the restoration of independence, Azerbaijan became a regional leader in a short time. According to him, the country has become one of the most dynamically developing economies in the world and initiated world-class projects that have changed the world’s energy and transport maps.

At the same time, speaking about Azerbaijan’s growing prestige in the international arena, the ambassador noted that the activities of the Non-Aligned Movement, of which Peru is a member, were highly appreciated among all members. It was pointed out that Azerbaijan is recognized as a country that has made an essential contribution to multicultural and intercultural dialogue.

Emphasizing that the territories occupied by Armenians for nearly 30 years were liberated as a result of the 44-day Patriotic War under the leadership of President Ilham Aliyev and the courage of the Azerbaijani people, the ambassador noted that this year marks the 270th anniversary of Shusha, the country’s cultural capital. Therefore, 2022 was declared the Year of Shusha. Giving information about the history and culture of the city, Talibov spoke about the restoration work carried out in Shusha, a victim of Armenian vandalism, the international festival and other events held in this city.

The ambassador also spoke about relations between Azerbaijan and Peru, noting that they are effectively maintained both bilaterally and within international organizations, including the Non-Aligned Movement and cooperation in the Pacific Alliance, where our country has observer status.

Stressing the high level of cooperation between the parliaments of the two countries, the ambassador thanked the Peruvian Congress for the adoption of a document condemning the Armenian aggression against Azerbaijan during the conflict and recognizing the Khojaly genocide.

Maria Teresa Merino, Director General for Europe of the Foreign Ministry of Peru, Jose Enrique Jeri, President of the Peruvian-Azerbaijani Inter-Parliamentary Friendship Group, and Ernesto Bustamante, President of the Peruvian Congress Foreign Affairs Committee, stressed the successful development of bilateral relations. They touched upon the importance of further expanding cooperation in culture. Then, Congressman Jose Enrique Jeri presented a congratulatory statement to the Ambassador of Azerbaijan on the occasion of the 104th anniversary of Azerbaijan’s independence.

Later on, the guests were shown a photo exhibition dedicated to the 270th anniversary of Shusha. They got acquainted with the Azerbaijani cuisine, were shown videos about the history, culture, and tourism opportunities of Azerbaijan, as well as listened to Azerbaijani folk and classical music.