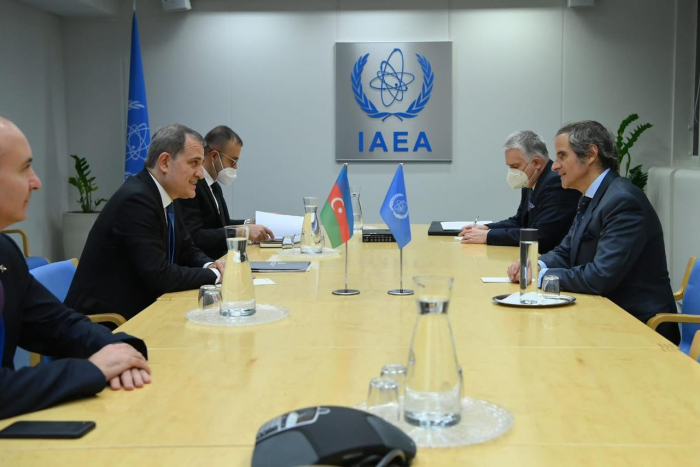 Azerbaijani Foreign Minister Jeyhun Bayramov met with Director-General of the International Atomic Energy Agency (IAEA) Rafael Grossi during his working visit to Vienna, according to the ministry.

According to the ministry, the parties expressed satisfaction with the level of mutual cooperation and exchanged views on topical issues and prospects for the future.

Bayramov spoke about the importance of the Treaty on the Non-Proliferation of Nuclear Weapons for the global nuclear non-proliferation regime and the agency’s role in this area.

Speaking about the importance of the IAEA verification system in the field of non-proliferation and the use of atomic energy for peaceful purposes, the minister noted that Azerbaijan attaches great importance to the protection and further strengthening of nuclear security and supports all efforts to expand international cooperation in this direction.

Besides, Bayramov stressed the importance of monitoring compliance by Armenia with safety rules during the operation of nuclear power plants, which use outdated technologies.

Grossi said that Azerbaijan is a very important partner of the IAEA and the parties are successfully cooperating in many areas.

According to him, there are prospects for cooperation between Azerbaijan and the IAEA in the field of environmental protection.

Other issues of mutual interest were also discussed at the meeting.