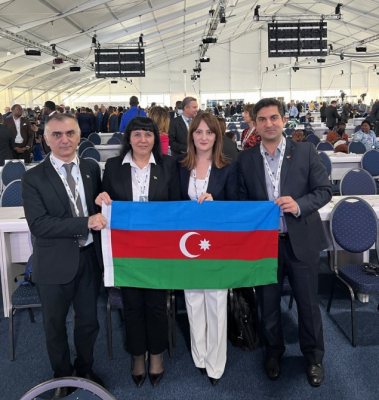 The next Plenipotentiary Conference of the International Telecommunication Union (ITU) is being held in Bucharest, Romania, from September 26 to October 14.

It should be noted that the ITU Plenipotentiary Conference, which takes place every four years, elects the secretary general, deputy secretary general of the organization, directors of the bureau, including members of the ITU Radio Regulations Board and the Council, the governing body of ITU.

Azerbaijan, being a member of the ITU since 1992, was elected to the Council in 2014 and 2018 and during this period actively participated in its activities.

On September 27, Minister of Digital Development and Transport of the Republic of Azerbaijan Rashad Nabiyev addressed the Plenipotentiary Conference and provided information on the projects implemented in Azerbaijan within the framework of digital transformation.

During the conference, the Azerbaijani delegation carried out advocacy work to establish close ties with representatives of several countries, identify new areas of cooperation, and the contribution that the country would make to the organization if elected.

The Ministry of Foreign Affairs also played an important role in Azerbaijan’s achievement of high results at this conference, along with the Ministry of Digital Development and Transport. Re-election of Azerbaijan to this prestigious international organization and receiving votes of more countries once again shows the further increase of the country’s authority in the international arena, as well as creates a basis for the large-scale work carried out in the field of telecommunications of the republic to be consistent and successful.

Read more:   As US election looms, Russians have ceased to hope that anything good will come out of America, regardless of who is president

Azerbaijan’s direct participation in the governance of the organization as a member of the Council is of particular importance in safeguarding the country’s interests as well as supporting sectoral activities. The representation of the country in both ITU bodies is also of particular importance to prevent illegal TV & radio broadcasting and use of frequencies in the liberated territories of Azerbaijan and to keep this topic on the ITU agenda on a regular basis.