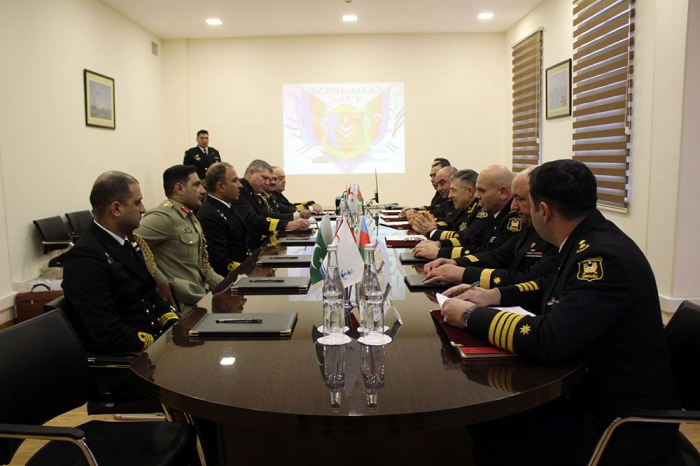 Commander of the Azerbaijan Naval Forces, Vice Admiral Subhan Bakirov held a meeting with a delegation led by Chief of the Naval Staff of the Pakistan Navy, Admiral Muhammad Amjad Khan Niazi in Baku, said, according to the Azerbaijani Defense Ministry.

First, an official welcoming ceremony was held in the Naval Forces. The chief of the Naval Staff of the Pakistan Navy passed along the guard of honor, and both countries’ national anthems were performed.

A wreath was laid at the monument to national leader Heydar Aliyev, erected in the territory of the military unit, and tribute was paid to his memory.

Then the head of the Pakistani delegation signed the Distinguished Visitors’ Book.

Welcoming the guests, Vice Admiral Bakirov stressed that cooperation between our countries in the military sphere is based on friendly and fraternal relations.

The delegation was given an extensive briefing on the history and activities of the Azerbaijan Naval Forces.

Expressing gratitude for the hospitality, Admiral Niazi emphasized the significance of the work carried out in the direction of further development of the Naval Forces of both countries.

The sides exchanged views on the expansion of Azerbaijan-Pakistan cooperation in the military, military-educational, and other spheres.

Then the inspection of warships took place, and the delegation was informed about their tactical and technical characteristics, as well as the accommodation and nutrition of the ships’ crew.