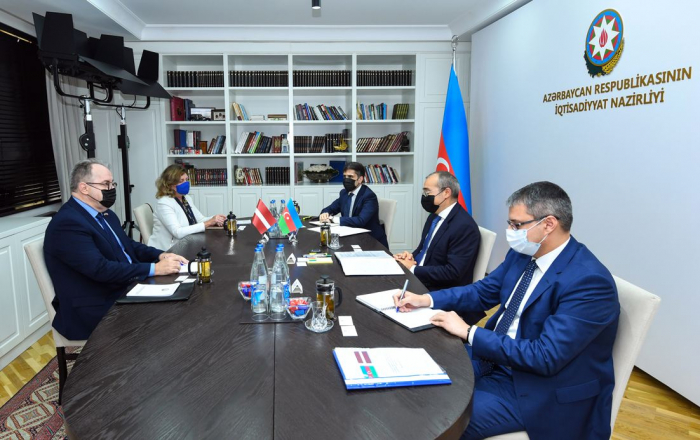 Azerbaijan considers it important to increase mutual investments with Latvia in the post-pandemic period, as well as expand opportunities for cooperation in the fields of transport, agriculture, public-private partnerships, pharmaceuticals, tourism, and the digital economy, Minister of Economy Mikayil Jabbarov said.

Jabbarov made the remark at a meeting with Latvian Ambassador to Azerbaijan Dainis Garanchs, according to Trend.

The importance of expanding ties between Azerbaijan and Latvia, the role of mutual official visits and meetings in the development of cooperation was emphasized at the meeting.

“Our countries are fruitfully cooperating in a number of areas of the economy. Diversification and enhancing trade ties are also priority areas. New mechanisms are being applied to expand cooperation in this area,” he said. “Thus, in 10 countries of Central Europe, including Latvia, the Azerbaijani Trade Representation and the ‘Azerbaijani Trade House’ operate in Riga. Moreover, numerous business forums and meetings were held between the entrepreneurs of the two countries, and an export mission to the Latvian capital city was organized. Azerbaijan is also successfully cooperating with Latvia within the framework of the EU Twinning Instrument.”

It was noted that the presence of developed transport infrastructure in both countries promises good prospects for expanding cooperation in this area. At the meeting, Latvian companies were also invited to explore the potential of the Alat free economic zone.

Garanchs pointed out that Latvia attaches great importance to the development of relations with Azerbaijan. Expressing satisfaction with the activities of Azerbaijan, he shared his view on the directions for expanding economic ties and stressed the interest of his country in cooperation in the restoration of the occupied territories of Azerbaijan.

The development of trade and economic cooperation and other issues were also discussed at the meeting.

Central Bank of Azerbaijan to raise funds at deposit auction

“Currently, the capacity of the Trans-Anatolian Gas Pipeline (TANAP) is 16 billion cubic meters. It…

U.K. government borrowing climbed to a record 214.9 billion pounds ($286 billion) in the first…

Global economy recovering, but may be losing momentum – IMF

The global economy is recovering from the depths of the coronavirus crisis, but there are…

Euro tops dollar as payments currency for first time since 2013

The Euro was the most used currency for global payments last month, the first time…

Azerbaijan gets 15% rise in gas export

The rapid spread of a novel coronavirus infection has created tension among investors. As a…

“Azerbaijani banks face growing challenges to their business growth and earnings prospects. These, combined with…

Murad Heydarov: “Transportation of Azerbaijani gas via TAP will start later in the year”

“The Trans-Adriatic Pipeline (TAP), which will transport Azerbaijani natural gas to Europe, has already been…