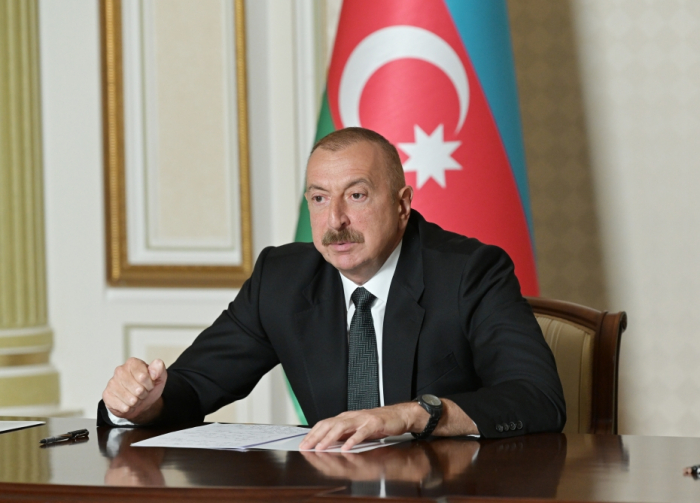 Armenia is being armed, and the most modern weapons are being sent to this country every day, said Azerbaijani President, Victorious Commander-in-Chief Ilham Aliyev.

The head of state made the remarks at an operational meeting held Sunday at the Central Command Post of the Ministry of Defense with the participation of the leadership of the Defense Ministry and the commanders of the joint corps located in the frontline zone.

“We have a list of these weapons. We have all the information about the flights, when, where and from which city they departed, when they arrived in Yerevan and what they carried,” he said.

President Aliyev noted that during the current fighting, about 300 Armenian tanks have been either destroyed or taken as military booty.

“Where does all this money come from? It is a poor country with no money and no opportunities. They got it for free. Six S-300 anti-aircraft missile systems have been destroyed. Their price is known. Where does this come from? TOR, OSA anti-aircraft missile systems, unmanned aerial vehicles, aircraft which have already been destroyed by Azerbaijan. Where did Tochka-U and SCUD come from? It is given to them for free. We cannot remain silent about it. Everyone should know this. We are fighting alone, on our own!” the head of state added.

President Aliyev noted that he is saying all this, first of all, for the people of Azerbaijan to know the real situation.

“People should realize at what cost we are liberating our lands from occupiers. People should know that if Armenia had not received financial, military and political assistance over the course of these 27-28 years, our lands would have been liberated from the occupiers long ago, and peacefully. Notice how Armenian soldiers are fleeing the battlefield. This footage is available. Only some of these images are published in the media but this is a very extensive video. Without these weapons, without this political support, could Armenia have occupied our lands? Of course not! As I said, we are driving them away and will continue to do that. No-one can stand in front of Azerbaijan. We are right, we are fighting on our own land, we are restoring our territorial integrity, we have not crossed into the territory of Armenia and have no such plans. If we had such an idea, we would have done it a long time ago. It does not take much effort to do so,” he concluded.