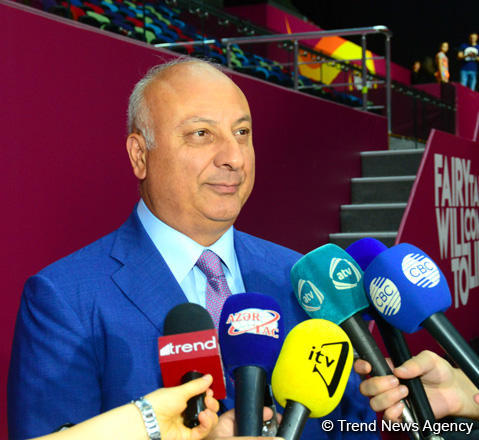 “The 37th Rhythmic Gymnastics World Championships will be held in Baku on September 16-22,” Hasanov said. “Overall preparations are underway for the competitions. We believe that everything will be at the high level.”

“For the first time, the Rhythmic Gymnastics World Championships in Azerbaijan was held in 2005. This was the first important sporting event in Olympic sports held in Azerbaijan. Since then, numerous European championships and World Cup competitions have been held in the country and we have gained some experience,” he added.

He pointed out that there is great interest in the current World Championships, in which representatives of 61 countries are taking part.

“I believe that the spectators who will follow the competitions will support our team,” Hasanov said. “Therefore, through the media, I invite everyone to this beautiful sports festival. Our main goal is to win licenses. As it is known, this World Championships allow for getting licenses for the Olympic Games to be held in Tokyo. This is very important for us.”

He noted that 45 percent of the tickets for the Championships were purchased from abroad.

After 14 years, Baku will again host the Rhythmic Gymnastics World Championships. During seven days, the gymnasts will perform in the National Gymnastics Arena, both in the individual program and as part of teams in group exercises. The gymnasts will compete in the competitions with individual apparatuses and in the all-around competitions. The names of the best athletes in the team event will also be announced.

Read more:   Trump to 'substantially increase' sanctions on Iran, amid calls for war

TOP-16 gymnasts performing in the individual all-around program will get the licenses (maximum two gymnasts from the country). As for the teams involved in group exercises, following the results of the last year’s World Cup, the teams of Bulgaria, Russia and Italy have already obtained the licenses. Five more teams will also get the licenses during the World Championships in Baku.