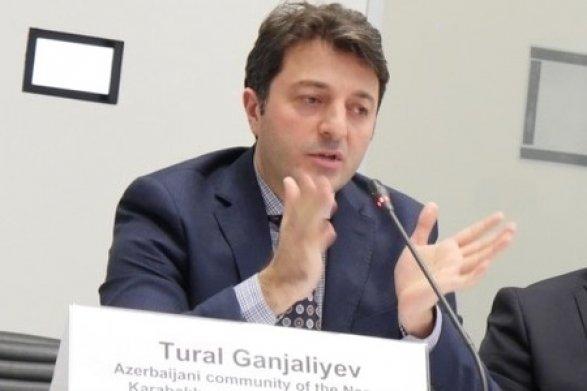 Despite that the statement by the OSCE Minsk Group co-chairs on the prospects of Paris negotiations between Azerbaijan’s Foreign Minister Elmar Mammadyarov and acting Armenian Foreign Minister Zohrab Mnatsakanyan on Jan. 16 with participation of the co-chairs is encouraging, more concrete results are expected from the talks, Tural Ganjaliyev, chairman of the Azerbaijani Community of the Nagorno-Karabakh Region of Azerbaijan said, Trend reported.

He made the remarks regarding a comment by David Babayan, who presented himself as the “spokesperson” of the head of the illegal regime established in the occupied Azerbaijani territories.

“As for Babayan’s phrases about ‘new elements’ and ‘engaging the parties in the dialogue as concrete steps’, the Azerbaijani community of Nagorno-Karabakh region in previously announced statements and comments – speaking as a supporter of a constructive dialogue and establishment of contacts between the Armenian and Azerbaijani communities – repeatedly noted that it is a party interested in the peaceful settlement of the conflict and once again expresses its readiness for this,” Ganjaliyev said.

From this point of view, the statements by the so-called spokesperson of the head of the illegal regime aren’t new, he noted.

“I would also like to remind Babayan once again that Armenia and Azerbaijan are the parties to the conflict, and the Armenian and Azerbaijani communities of Azerbaijan’s Nagorno-Karabakh region are the interested parties,” Ganjaliyev noted. “This is confirmed by the document adopted at the OSCE Ministerial Council meeting in Helsinki in 1992.”

He also said that mentioning only the Armenian community of Nagorno-Karabakh as an interested party and ignoring the Azerbaijani community is contrary to the spirit of the statement made at the meeting in Paris.

“We believe that dialogue and contacts between the communities are of particular importance for discussing ways to prepare the population of each party to peace, security and sustainable development in the region, which were on the agenda of the Paris talks,” Ganjaliyev added.

Read more:   The Mueller report's free, but publishers are selling it as a book

He once again stressed that the Azerbaijani community of the Nagorno-Karabakh region of Azerbaijan hopes for a peaceful settlement of the conflict and ensuring coexistence with the Armenian community.

Humans left behind a record amount of e-waste in 2019

2019 set a record for the amount of e-waste ever generated worldwide: 53.6 million metric…

Former Tory Chancellor Philip Hammond has waded into the row over Huawei, accusing his party…

Study shows that when dying, stars fertilize the universe with their ashes

New findings show that when stars die they gently sprinkle chemical-rich ashes throughout the cosmos.…

The challenges of positive parenting