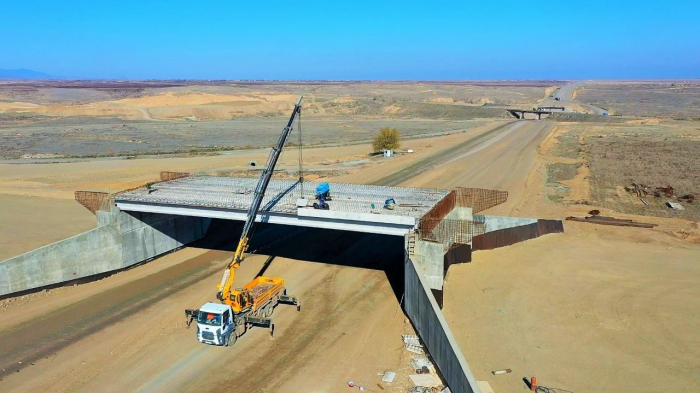 Construction and restoration of nine out of 13 roads started in the liberated territories of Azerbaijan, Aida Badalova, adviser of digital development and transport minister, said.

Badalova made the remark at an event entitled “Priorities in the field of digital development and transport in Azerbaijan”.

“The Ministry of Digital Development and Transport has structured its activities in accordance with national priorities in order to facilitate the return to the liberated territories, ensure the growth of a competitive economy and the formation of competitive human capital and modern innovative tools,” she noted.

According to her, the construction of roads and tunnels between Goygol and Kalbajar, Kalbajar and Lachin, the section of the Barda-Aghdam, and Talish-Tapgaragoyunlu-Gashalti-Naftalan highway should be emphasized.

Besides, according to the adviser, preparations are underway to start construction of the Zangilan International Airport and an airport in the Lachin district.

“Together with ICAO and the International Air Transport Association, the necessary measures are being taken to ensure the timely commissioning of these airports,” she pointed out. “Transport infrastructure restoration projects will also expand the transit capabilities of the region and Azerbaijan in the context of the construction of the Zangazur Corridor which will provide a direct land connection to Nakhchivan, as well as will form the shortest land route between China and Southern Europe.”

In order to regulate the access of road carriers to the international cargo transportation market, prevent monopoly, increase the professionalism of carriers and drivers, improve Azerbaijan’s position in international ratings, a corresponding memorandum has already been signed with the Association of International Road Carriers of Azerbaijan to distribute permit forms for international transportation, Badalova said.

“One of the main goals of this document is to ensure transparent distribution of permit forms,” she added.