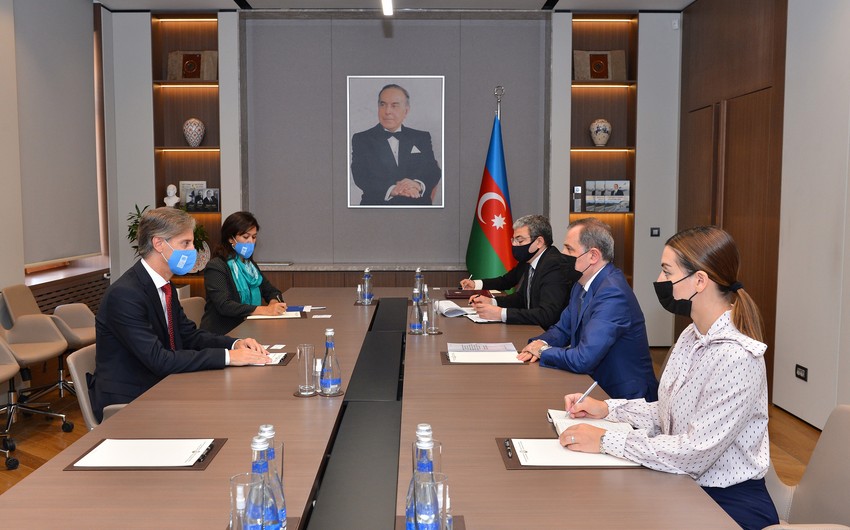 Azerbaijan’s Minister of Foreign Affairs Jeyhun Bayramov has received Resident Coordinator of the UN Development Program in Azerbaijan Alessandro Fracassetti over completing his mission in the country.

Minister Jeyhun Bayramov noted the successful activity of the resident coordinator in Azerbaijan and thanked Alessandro Fracassetti in this regard.

Underlining the importance Azerbaijan attaches to cooperation with the United Nations and its specialized structures, Jeyhun Bayramov stressed the significance of the UN Development Program.

Alessandro Fracassetti, in turn, expressed his gratitude for the attention paid to him during his tenure and praised the government’s support for the UNDP mandate. UNDP, which has been operating in Azerbaijan since 1992, has been involved in several areas during this period, including support for vulnerable groups, vocational education, climate change, the green economy, rural development, youth employment, and more. He noted the successful implementation of the programs and added that UNDP also supported demining activities in the post-conflict period.

Nuclear arms race ‘stupid,’ Beijing will make sure it can destroy US just ‘ONCE’ – Chinese media boss

Matching the number of nuclear weapons with Washington is a fool’s errand, when all it…