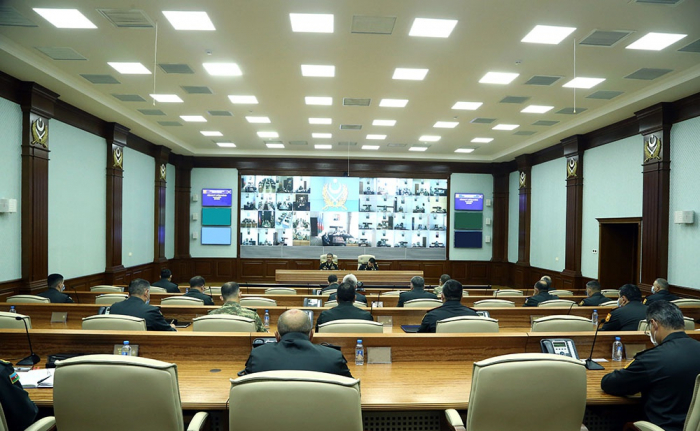 On September 19, the Minister of Defense of Azerbaijan Colonel General Zakir Hasanov held an official meeting with the command staff of the Azerbaijan Army, according to the Defense Ministry of Azerbaijan.

Firstly, the memory of the national leader of the Azerbaijani people Heydar Aliyev and the Shahids (martyrs) who died for the territorial integrity of our country was honoured with observing a minute of silence.

The Minister of Defense stressed that the latest information received and messages spread in the mass-media, as well as the military rhetoric in the speeches of the military-political leadership of Armenia, the conduct of mobilization activity and the involvement of external forces into the region clearly indicate that the enemy intends to commit large-scale provocations and aggravate the situation. Considering this, the forces and means available in our use must be fully ready not only to suppress any provocations but also to take strict preventive measures. For this, special attention should be paid to reconnaissance activities and combat support, as well as to take organized actions in all areas.

It is necessary to strengthen control over the quality of exercises and training aimed at constantly increasing the combat capability and professionalism of the Azerbaijan Army, in particular its foremost units, as well as at increasing the level of combat readiness of military personnel and the liberation of the occupied territories.

The Minister of Defense instructed the officials to pay special attention to the transfer of weapons, military and specialized equipment of the Azerbaijan Army into the winter operation mode, the effectiveness and timely completion of the preparation process for the winter period, the full logistic support of units, the health of military personnel, as well as measures to fight the COVID-19 pandemic

In the end, Colonel-General Z. Hasanov instructed to clarify combat analysis and mobilization resources with the relevant structures in accordance with the action plan, as well as to get ready to conduct training sessions in various specialities, field activities, and combat training classes with reservists.