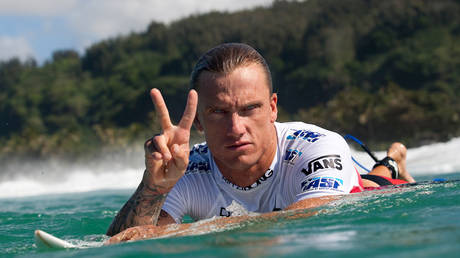 Chris Davidson was the victim of a one-punch attack in a small coastal town in New South Wales, according to reports Former surf pro Davidson pictured in 2009. © Kelly Cestari / World Surf League via Getty Images

Tributes have poured in for Australian surfer Chris Davidson, who died on Saturday night after being punched outside a pub in a small coastal town 280 miles north of Sydney.

The 45-year-old was reportedly hit in the face by a 42-year-old man, who has been arrested and charged with assault causing death.

Davidson struck his head on the pavement outside the Sportsmans Way pub in South West Rocks after receiving the blow, and was treated at the scene by New South Wales Ambulance paramedics, according to police.

Davidson died shortly afterwards at Kempsey Hospital, leading to tributes pouring in for the Sydney native who featured on the world surfing tour in 2010 and 2011.

Surfing legend Kelly Slater called Davidson “one of the most naturally talented surfers I ever knew.”

The World Surf League, and the surfing community at large, are saddened to learn that former CT surfer Chris Davidson, of Narrabeen, Australia tragically passed away on Saturday. Our thoughts are with his family and friends. pic.twitter.com/pBHPSD77nF

“Had many a good battle with this guy,” added 11-time world champion Slater, who was beaten by a 19-year-old Davidson when he entered the Rip Curl Pro tournament on a wildcard at Bells Beach in Australia in 1996.

Surfing New South Wales’ executive director Mark Windon said Davidson was “one of the most stylish surfers” their homeland had ever produced.

“He was an absolute prodigious talent and as flamboyant as he was in the water,” Windon added to Australian broadcaster ABC.

“[He] was a larger-than-life character, and for his life to finish that way is really sad.”

Surfing Australia said the sport’s local community was mourning the loss of an “incredibly talented surfer and a true individual” affectionately known as “Davo” in a Facebook post.

Speaking to Nine’s Today show, close friend Chris Hedge said that Davidson’s death was tragic and described him as a unique character who was kind-hearted and the life of the party. 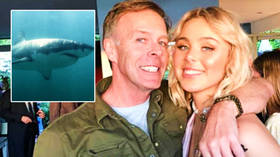 “Not only has Chris’ life been taken from us, the other person’s life is shattered and ruined as well.

Read more:   Ministry of Defense and State Committee for Work with Religious Associations held a joint event in a military unit

“Nothing positive can come out of this. It’s the worst thing in the world and it’s got to stop – it’s not good enough, it’s just got to end.”

The suspect charged with assault causing death was refused bail on Monday and will be brought before a court in November, according to local media. (RT)