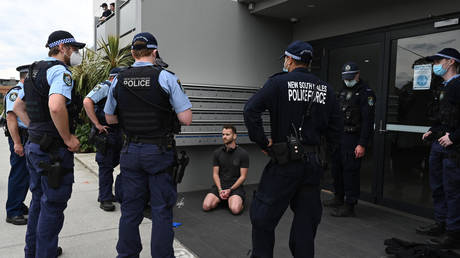 Police detain a man after checking his identification in Sydney on September 18, 2021, following calls for an anti-lockdown protest rally amid the coronavirus pandemic ©  Saeed Khan / AFP

Clashes erupted with police in Melbourne, Australia after a crowd of anti-lockdown protesters gathered to demand an end to weeks of draconian restrictions, despite an all-out effort by authorities to prevent demonstrations.

The protesters, who reportedly numbered in the hundreds, showed up in the Melbourne suburb of Richmond on Saturday morning to denounce government lockdown policies.

Police previously attempted to shut down all transport into Melbourne’s Central Business District using a series of checkpoints, but that merely prompted organizers to shift locations. (RT)