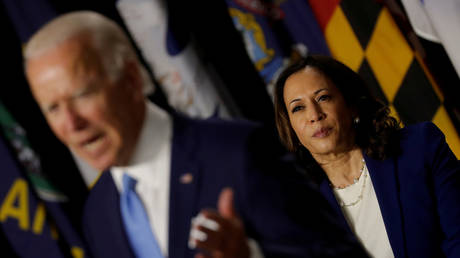 The Australian is under fire for publishing an allegedly racist cartoon that depicts US Democratic presidential candidate Joe Biden referring to his running mate Kamala Harris as “this little brown girl.”

The cartoon by artist Johannes Leak was published in Rupert Murdoch’s The Australian newspaper earlier this week, in an apparent attempt to deride the US Democratic party for perceived tokenism and racially motivated pandering, according to the paper’s editor-in-chief, Christopher Dore.

Here’s your little reminder of how ludicrously racist Australian commercial media are. This is in the country’s only national daily newspaper: pic.twitter.com/7oN7bjRWLO

The controversial cartoon depicts a smiling Biden announcing that it’s time to “heal a nation divided by racism” before beckoning Harris to the podium while he goes “for a lie-down.” Needless to say, the backlash was swift and immediate online from the woke sectors of the Twitter commentariat.

Australian Labor politician Andrew Giles described it as “offensive and racist,” and called for “zero tolerance of racism, and a national anti-racism strategy.” Fellow Australian Labor MP Andrew Leigh echoed his colleague’s sentiments, and demanded an immediate apology and the removal of the cartoon from The Australian’s website.

Science writer Ketan Joshi described Australian commercial media as “ludicrously racist,” while claiming in a twitter thread that Biden’s own words had been taken out of context and twisted to use against him.

Indeed, in a note to staff at The Australian, editor-in-chief Chris Dore claimed Leak had merely held a mirror up to the US Democratic Party’s own cynicism in giving Harris the nod as VP.

“The words ‘little black and brown girls’ belong to Joe Biden, not Johannes, and were uttered by the presidential candidate when he named Kamala Harris as his running mate yesterday. He repeated them in a tweet soon after,” Dore said in a note to staff.

This morning, little girls woke up across this nation — especially Black and Brown girls who so often may feel overlooked and undervalued in our society — potentially seeing themselves in a new way: As the stuff of Presidents and Vice Presidents.

“The intention of Johannes’s commentary was to ridicule identity politics and demean racism, not perpetuate it,” Dore added. “The Australian, and Johannes, opposes racism in all of its guises.”

Defenders of the cartoon also argued that people were only so upset because of the bitter truths it contained, while others alluded to the Democratic Party’s own sordid past and alleged history of racism. (RT)

Internet in Azerbaijan restricted due to Armenian provocations

Internet access across the country has been restricted to prevent large-scale provocations by Armenia, according…

14:39 State Service for Mobilization and Conscription of Azerbaijan appeals to people