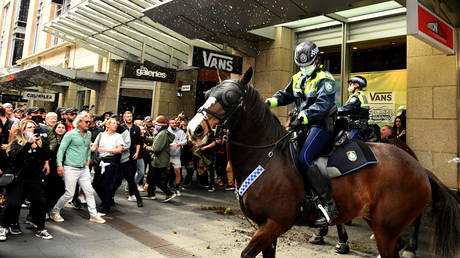 Australian police have already issued hundreds of fines in the wake of mass anti-lockdown rallies, and are looking for more info about the violators, as state leaders condemned the protesters for endangering other people’s lives.

A strike force is set up right at this moment that continues to ask for people to bring forward any video files or telephone footage that they have of that sort of behaviour.

State premier Gladys Berejiklian echoed these sentiments, saying she was “absolutely disgusted” by the mass gatherings, and urging anyone who recognized any of the activists to contact police immediately.

I’m just so utterly disgusted, disappointed and heartbroken that people don’t consider the safety and wellbeing of their fellow citizens.

NSW reported two deaths and 141 new cases of Covid-19 on Sunday, which is slightly lower than the day before. Authorities however already hinted that as the protest risks turning into a superspreader event, the month-long lockdown in Sydney might be extended even further.

“We don’t want a setback, and yesterday could have been a setback – time will tell,” Berejiklian said. The state’s current lockdown rules bar residents from leaving home except to obtain food and other “essential” goods and services, for medical care, including vaccinations, and for outdoor exercise and “essential” work. (RT)