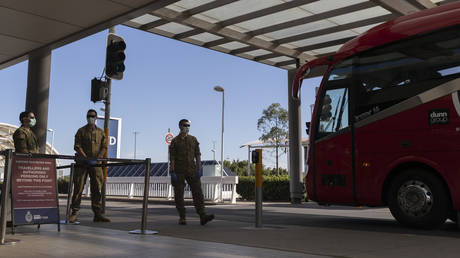 Indigenous representatives and community groups have warned that the Australian government’s “disturbing” use of troops to enforce lockdown rules in Sydney will “create greater fear and uncertainty” and may alienate residents.

Starting next week, at least 300 defense personnel are expected to patrol the streets after New South Wales police issued a formal request for help. The country’s biggest city, which houses one of its largest indigenous populations, is heading for a sixth week under Covid-19 lockdown.

Data from the country’s 2016 census shows that around one in every nine indigenous Australians lives in Sydney – with the majority residing in the city’s western suburbs, where about two million people live. That accounts for a third of the city’s total population.

These areas, which are also home to large migrant and refugee populations, have been among the hardest hit by an outbreak of the highly contagious Delta variant of the Covid virus that began in June. It has mainly affected critical workers and large families, leading to nearly 3,000 infections and nine deaths.

But community groups have criticized both the national and state governments for adopting a heavy-handed approach to the situation. The New South Wales (NSW) Aboriginal Legal Service told the Guardian that the area was already singled out for “targeted” policing measures.

“Our community is targeted by police day in and day out – this will only get worse if police are given additional powers and backed up by army troops,” said the group’s Chief Executive Karly Warner, who added that the situation called for “social workers … not armed forces.”

“Choosing to use force and fear by giving police additional powers and rolling in army troops to communities is disturbing. This will only create greater fear and uncertainty among our families and friends,” Warner told the paper.

Under lockdown rules, which are in place until the end of August, city residents are not permitted to leave their homes except for essential activities like shopping, exercise routines, and caregiving, among others. A strict 10km travel limit has also been imposed.

The rates of infection are higher in eight local government areas (LGA) that have been designated as being ‘of concern’. The lockdown rules are stricter in these areas, which are run by a local council.

Steve Christou, mayor of the hard-hit Cumberland LGA, tweeted that the troop deployment was a sign the state government had “lost all control.” (RT)