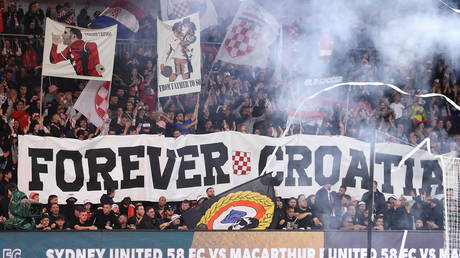 Alleged Nazi salutes and the booing of an Indigenous welcoming ceremony at the Australia Cup final on Saturday saw Football Australia promising to take swift and strong action against a “small minority of individuals.”

The governing body said in a statement released on Sunday that it was “today assessing all footage and images available of certain individuals which are of concern to our organization and the broader Australian football community, including the displaying of the ‘Hitler salute.’”

Football Australia is “working closely with the management of CommBank Stadium and New South Wales Police to determine strong and swift action on any identified anti-social behavior, which may also be deemed as illegal in the state of NSW,” and the organization “will be holding discussions with Sydney United 58 FC about the behavior of certain fans, which could lead to both individual and club sanctions.”

Images shared on social media appear to show Sydney 58 supporters performing Nazi salutes, and the club has said it is working closely with the authorities to carry out a full investigation.

You mean to tell me people like this booed the welcome to country? Absolutely disgusting. #AustraliaCuppic.twitter.com/MIX36z1I1r

A few more. Sydney United Nazis are stain on australian football. This needs to called out and stamped out. pic.twitter.com/zMPOHfA1m5

“Sydney United 58 FC has zero tolerance towards any form of disrespect, racism or discrimination,” the club, formerly known as Sydney Croatia, said.

“Those that do not align themselves with these values are not welcome at Sydney United 58 FC and their views will never be tolerated.”

Former Australia international Jade North, who was the first indigenous player to captain the national team known as the Socceroos, said the behavior, which included booing the ‘Welcome to Country’ ceremony and saw eight fans ejected, was disrespectful.

“It is extremely disappointing that respect for the cultures and practices of Aboriginal and Torres Strait Islander Peoples is not met by some sections of Australian society today in the same spirit in which it is extended,” the co-chair of the Football Australia National Indigenous Advisory Group said. 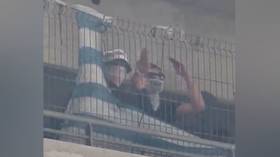 On Sunday, Professional Footballers Australia co-CEOs Beau Busch and Kathryn Gill said that the unruly fans had shattered the “universal values of fairness, respect, and courage.”

“Our sport must now respond and the players are committed to playing an important role,” Busch and Gill demanded in a statement.

“An effective response will not be developed by focusing on whether or not these actions were inflicted by a minority.” (RT)