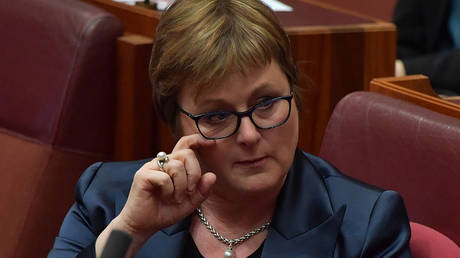 Senator Linda Reynolds wipes a tear during Question Time in the Senate on February 18, 2021 in Canberra, Australia © Getty Images/Sam Mooy

Australian Defense Minister Linda Reynolds has unexpectedly taken sick leave just as she was about to answer questions about a young staffer’s claims that she was raped by a male colleague inside the minister’s office.

According to a statement on the Department of Defense’s website, Reynolds has been admitted to a Canberra hospital “as a precautionary measure” on the advice of her cardiologist, relating to a pre-existing condition.

The statement did not specify how long Reynolds will be staying in hospital. It said Prime Minister Scott Morrison spoke to her and wished her a quick recovery. According to media reports, he also spoke to her cardiologist.

Reynolds, who has been criticized over her handling of rape allegations, was set to deliver a much-anticipated speech at the National Press Club and answer questions from reporters about the disturbing claims made by her former staffer against a male colleague.

Also on rt.com A #MeToo rape scandal has rocked the Australian parliament, but woke culture is obscuring what’s most important: the facts

Brittany Higgins claims she was assaulted by a male colleague in 2019, when she was a media adviser to the government. She said that, after a night out drinking with co-workers, a man offered to take a cab with her. But instead of dropping Higgins at home, he took the young woman to the Parliament House in Canberra, where both chambers of Australia’s parliament and the prime minister’s office are located.

Higgins said she was raped inside Reynolds’s office. The woman was discovered by a security guard as she was lying on a couch half-naked after the man had left.

The former staffer said the incident was initially treated as a security breach. She reported the alleged rape to superiors and police, but initially chose not to make a formal complaint, because she wanted to protect her “dream job” and the ruling Liberal Party on the eve of an election.

“It was just about my job. If it had happened on a street corner away from parliament there was no doubt in my mind,” Higgins told news.com.au website.

Nevertheless, Higgins now says she felt abandoned and neglected by her boss Reynolds and other superiors who did not treat her case with necessary urgency. (RT)