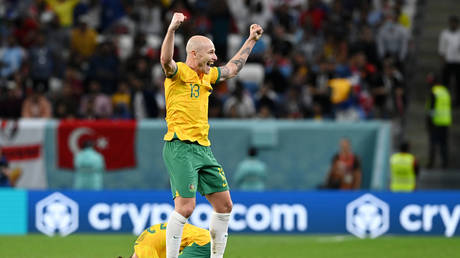 A single goal from Mathew Leckie was enough for Australia to shock the not-so-great Danes in their Group D clash on Wednesday, ensuring that the Socceroos move to the knockout stages of a FIFA World Cup for the first time in 16 years.

Denmark, who needed three points to secure their own passage to the last 16 in Qatar, enjoyed the lion’s share of possession throughout but struggled to break down a stubborn Aussie rearguard, and ultimately resorted to a barrage of late, long and diagonal balls as the second ticked away to what would become a famous Australian win.

Read more:   Memorandum of Understanding between Azerbaijan and Turkey approved

The crucial goal came on the hour when Melbourne City winger Mathew Leckie put the finishing touches on a swift Australian counter-attack to slide the ball past a helpless Kasper Schmeichel to give his side what would prove to be an unassailable advantage. (RT)