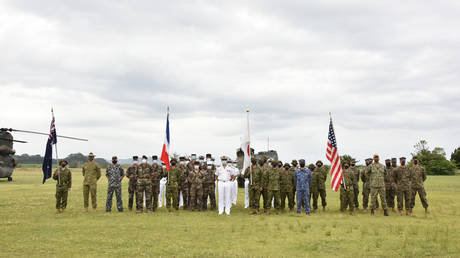 Representatives from Japan, the US, France, and Australia attending a joint military drill starting ceremony at JGSDF's Camp Ainoura in Sasebo, Nagasaki prefecture, on May 11, 2021. © AFP / Japan Ground Self-Defense Force

US, French and Japanese soldiers have begun their first-ever joint military exercise in the southwest of Japan, with Australia also joining the week-long drill as tensions between China and other countries in the region intensify.

The exercises in the Kyushu region will see the nations take part in air, land and sea drills, while Australia has sent a naval ship to support the operation involving around 300 troops, fighter jets, 10 surface vessels and a Japanese submarine.

This is expected to be the first of several joint military exercises conducted by Japan in the region. A British aircraft carrier and a German naval vessel are set to head to the Indo-Pacific waters later in 2021.