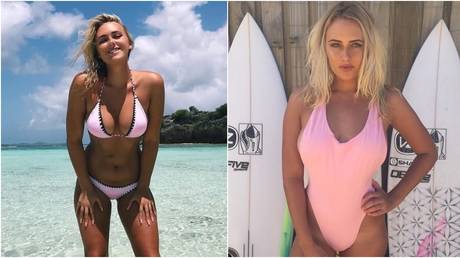 Surfer Ellie Jean Coffey discussed the darker side of the sport. © Instagram @elliejeancoffey.

Australian former pro-surfer Ellie-Jean Coffey – who has launched her own X-rated website – has opened up on the mental and physical abuse she says received during her time in the surfing industry.

The 25-year-old, who competed in the World Surf League’s women’s qualifying series between 2010 and 2017, recently made headlines after setting up her own adult website, ‘Ellie Unlocked’.

But the blonde bombshell was earlier best-known for making waves of a different kind, having entered the surfing industry before she had even turned a teenager.

Sponsorships and trips to international events quickly became part of Coffey’s life in the years that followed, but she told news.com.au it was a traumatic period for her growing up.

“At first I thought and believed I was the luckiest girl in the world to be living such a life, and not long after that, the darker side of the surfing industry soon revealed itself to me, and it was terrifying,” Coffey said.

“The abuse, both mentally and physically, I endured during my teenage years far away from home with adults in positions of power has haunted me my whole life.

“It was a pretty horrible time in my life. I think people in positions of power tend to abuse that power, and I was only a young girl, and it’s taken me a long time to recover.”

Coffey revealed she had not previously discussed the abuse she faced in those years, outside of close family and friends.

However, she was inspired to come forward and shine a light on the “misogyny and male-dominated” surf industry, which she feels has not been widely acknowledged, by the #MeToo movement.

“As much as I loved surfing, I just completely broke down,” she added. “I couldn’t continue with all the abuse; it almost drove me to suicide, and I was lucky to go get that therapy and recover from it. And I know a lot of girls in the industry who have a very similar story.”

Coffey said that while the abuse she received was “absolutely devastating,” she feels she came “out of it stronger and better than ever.”

The Australian was a regular in the women’s qualifying series during her time as a pro, achieving a career-high rank of 20th in 2014.

According to news.com.au, Coffey still surfs for fun but will never compete professionally again.

In August, she launched a new venture – an X-rated website in which she offers “uncensored content, private chat and more” for a $10 monthly subscription.

Coffey said the website, ‘Ellie Unlocked’, “empowers me to motivate other women to not limit themselves in fear of others’ opinions.”

“I finally feel as though I can express myself freely without the worry of what other people think,” she added. “I really feel this is a movement, and I couldn’t be happier.”

Her sister Holly-Daze Coffey, 22, was also a former pro surfer who competed between 2011 and 2017. She announced a similar X-rated website earlier in September. (RT)

“Everything will depend on how Armenia behaves because it violated the first two ceasefires. Within…

Armenia established a corridor to bring the PKK into Azerbaijan’s occupied territories, Assistant to the…