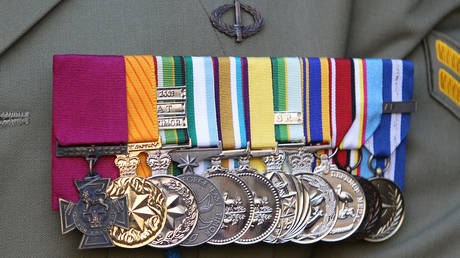 FILE PHOTO. A picture shows the medals, including a Victoria Cross, on the uniform of Australian Corporal Benjamin Roberts-Smith. © AFP / Lewis Whyld

Former SAS corporal Ben Roberts-Smith has firmly rejected allegations he ever killed unarmed detainees in Afghanistan, as well as claims he ordered a rookie to kill unarmed Afghan men in a “blooding” ritual.

The new round of hearings in the defamation case launched by Roberts-Smith, one of Australia’s most-decorated living war veterans, against news outlets that exposed his alleged war crimes, took place at Sydney Federal Court on Friday.

The hearings did not exactly go smoothly for Roberts-Smith, with the former soldier pelted by the defense barrister, Nicholas Owens, with assorted uncomfortable questions about his time in Afghanistan. Some of the questions were related to an incident that took place on September 11, 2009, when Roberts-Smith’s unit was deployed to the small village of Darwan, in Afghanistan’s Uruzgan province.

Also on rt.com Trial of the century will reveal EXACTLY what Australian soldiers really got up to in Afghanistan

According to Roberts-Smith’s account, an Afghan man, identified as Ali Jan, was killed while hiding in a cornfield and acting as a spotter for the Taliban. The defense, however, alleged the man was actually detained – and then brutally killed by the plaintiff, who kicked him off of a cliff. The former corporal denied the accusation, as well as claims that he colluded with two soldiers to cover up the killing.

He even disputed whether there was a cliff in Darwan high enough to kill someone in this way. He said it was “very steep terrain. If it was a cliff you couldn’t walk down it.”

“In Afghanistan, things are steep everywhere,” he stated. Presented with photos of the area where the incident allegedly took place, Roberts-Smith laughed when he was asked if he recognized it, Australian media reported. 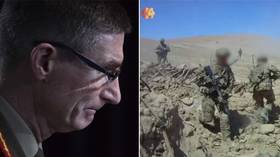 Roberts-Smith was also grilled on a separate incident, in which he allegedly interrogated, detained, and restrained an Afghan man, punching the victim in the process and ultimately shooting him dead.

“He was wearing flexi-cuffs when he was shot wasn’t he?” Owens asked. “You interrogated three men you had found for more than an hour, assaulted those men, eventually killed one of those men?” (RT)