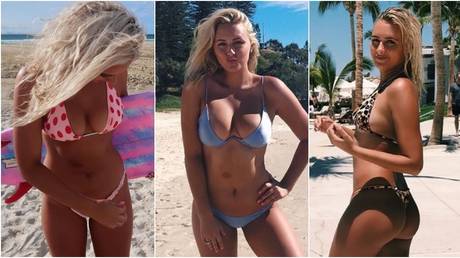 Australian former surfing professional Ellie-Jean Coffey says she “couldn’t imagine in her wildest dreams” the success she has enjoyed after launching her own X-rated website where she shares “uncensored content” with fans.

Ellie-Jean, 25, launched her X-rated website in August and was followed not long after by her 22-year-old sister Holly-Daze.

The blonde duo both previously competed in high-level surfing events, with Ellie-Jean taking part in the World Surf League’s women’s qualifying series from 2010 to 2017, while Holly-Daze did the same between 2012 and 2017.

Speaking to news.com.au about her decision to start making waves of a different kind with her Only Fans-style adult website, ‘Ellie Unlocked’ – which offers subscribers “uncensored content, private chat and more” for a monthly fee of $10 – Ellie-Jean said the overwhelming response to the move had been positive, despite some critics previously imploring her to “get back in the ocean” and claiming she was “better than this.”

“It’s been very much the same as everything else I have ever done in my life. Most people love it, and some people hate it,” Coffey said.

“There’s not one person I love or care about that’s not been entirely supportive. In fact, it’s been overwhelming the support I’ve received.

“It’s also liberating knowing I’m strong enough to face the adversity and do what I want to do and express myself openly.”

Ellie-Jean and sister Holly-Daze boast a combined Instagram following of more than 2 million, while younger sisters Bonnie-Lou, 19 and Ruby-Lee, 20 are also Insta-famous.

Ellie-Jean and Holly have even been nicknamed the ‘Kardashians of Australian surfing’, but the elder of the pair said that while they had enjoyed some renown in the water, she was now giving fans a fuller taste of her life.

“I am known in the world of surfing, and have built up quite a following from the sport, but they’ve been eager to see more of my life outside of surfing, and our website has allowed me to do just that,” she said.

“Every decision I make is calculated, so it wasn’t just an overnight decision, but a decision that I knew would lead to the success it has been.”

The tanned and toned blonde bombshell added that her move into the adult website industry had been backed by her family, saying: “I did speak to [them] by the time I had all the information regarding what the website entailed, and they’ve all been extremely supportive.”

Ellie-Jean didn’t disclose just how lucrative her adult-themed move had been so far, but admitted that her success had surpassed her expectations.

“I couldn’t imagine in my wildest dreams how well the website has gone, honestly. Personally, for me as a young woman, I have enjoyed every minute of it…

“While I’m not going to share how much money I have been making, I will say it’s by far the most successful opportunity I have taken. But most importantly, it empowers me to motivate other women to not limit themselves in fear of others opinions.

“It’s changed my life. I finally feel as though I can express myself freely without the worry of what other people think…

“I’m a businesswoman, not just a surfer, and I created a blueprint for myself that allowed me to succeed in any environment thrown at me.

“My biggest challenge was believing in myself, as most offers I have received on social media, they were sort of a joke.”

The move by the surfing sisters will draw comparisons with countrywoman Renee Gracie, who swapped race cars for racy photos when she set up an Only Fans account, later revealing she had massively increased her income. (RT)

Battles continue in all directions of the frontline

Currently, battles continue in all directions of the front, Spokesman for the Azerbaijani Ministry of…

International organizations informed about rocket attacks on our regions

On October 22, the Chief of the International Military Cooperation Department of Ministry of Defense,…

We are proud to announce that on October 20, 2020, our servicemen who liberated the…

Azerbaijan-Georgia relations are of strategic importance

“Azerbaijan-Georgia relations have always been of strategic importance for both countries. The national interests of…

Peace will change the situation in region completely, Azerbaijani President Ilham Aliyev said in an…

State border between Azerbaijan and the Islamic Iran completely secured

“A considerable number of statements are being made in connection with the Nagorno-Karabakh conflict. These…

Spain needs “drastic measures” to tackle its “out of control” second wave of Covid-19 infections,…

“The liberation of Azerbaijan’s border region with Iran, especially the Khudafarin Bridge connecting Azerbaijan and…