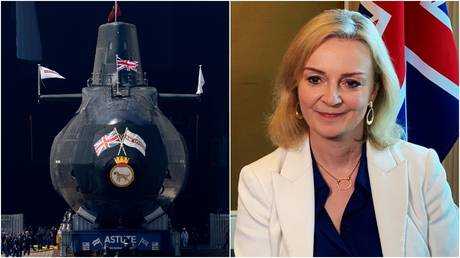 The US, UK and Australian pact to arm Canberra with nuclear submarines is about delivering for all British people and underscoring the country’s role as a “fierce champion” of freedom, new UK Foreign Secretary Liz Truss insisted.

Truss, who was promoted to foreign secretary after a government reshuffle earlier this month, was trying to justify the need for Britain’s participation in the highly controversial AUKUS agreement in a dedicated article in the Sunday Telegraph.

“Freedoms need to be defended, so we are also building strong security ties around the world,” she wrote, explaining the reasoning behind London’s participation in the trilateral deal.

It shows our readiness to be hard-headed in defending our interests and challenging unfair practices and malign acts.

According to the pact, announced by the US, UK and Australian leaders on Wednesday, the sides will work together to provide Canberra with a fleet of state-of-the-art nuclear-powered submarines, armed with conventional weapons.

Read more:   WHO rep in Azerbaijan: We have long way to go

The new deal led to Australia abandoning an earlier $66 billion contract with France for diesel-electric submarines, causing outrage in Paris, which labelled it a “stab in the back” and recalled its ambassadors for consultation from Canberra and Washington.

AUKUS is seen by some as a tool to limit China’s growing influence in the Indo-Pacific region, so Beijing was also critical of the agreement and accused its signatories of having a “Cold War mentality.” (RT)